Year in review: a look at highs and lows of Trudeau’s first full year as PM 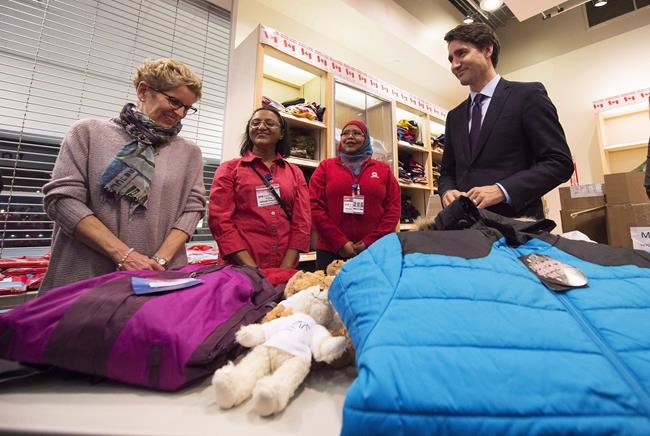 OTTAWA — As Justin Trudeau's first full year as prime minister comes to a close, downtown roads in the nation's capital are clogged with snow and construction.

It's an apt metaphor for the increasingly tough slogging Trudeau's Liberal government has experienced since the heady days last fall, when the fledgling prime minister was winning raves for appointing the first gender-equal cabinet, handing out winter parkas to newly arrived Syrian refugees, being greeted like a rock star by screaming fans and boldly declaring "Canada is back" on the international stage.

He's been slowly building on his campaign promises to construct a cleaner, fairer, more prosperous, progressive and compassionate Canada, but it's been a bumpy ride with some unanticipated roadblocks along the way.

Here's a look at the high and low points of Trudeau's year:

Jan. 19, 2016: The government names members of a new independent advisory board that is to recommend non-partisan nominees for the Senate. The board's work is the key to Trudeau's plan to repair the Senate's tattered reputation in the wake of the expenses scandal and to restore the upper house's intended role as an independent chamber of sober second thought.

March 3, 2016: Trudeau and premiers agree to the "Vancouver Declaration" on climate change, which includes a commitment to putting a price on carbon pollution. The agreement papers over deep divisions on the issue, leaving the details to be hammered out over the next eight months.

March 10, 2016: Trudeau is feted in Washington with the first state dinner for a Canadian prime minister in 19 years. The "bromance" between Trudeau and President Barack Obama blossoms.

But it also abandons Trudeau's promises to run deficits of no more than $10 billion in each of the first three years of his mandate, produce a balanced budget in the fourth year and keep the debt-to-GDP ratio on the decline each and every year. The budget projects deficits for at least five years, totalling $113 billion, including almost $30 billion this year alone. Morneau shifts to predicting a lower debt-to-GDP ratio over the course of the mandate.

April 14, 2016: The government introduces a bill in response to the 2015 landmark Supreme Court ruling that struck down the ban on medical assistance in dying. Bill C-14 would allow assisted dying only for consenting adults "in an advance stage of irreversible decline' from a serious, incurable disease, illness or disability and for whom a natural death is "reasonably foreseeable."

That's more restrictive than the Supreme Court's directive that medical assistance in dying be available to consenting, competent adults with "grievous and irremediable" medical conditions that are causing enduring, intolerable suffering.

The bill eventually passes in June, despite strong objections in the Senate. Just 10 days later, the first constitutional challenge to the new law is launched.

April 26, 2016: One day after Canadian John Ridsdel is brutally beheaded by Islamic terrorists who'd held him hostage for seven months in the Philippines, Trudeau says his government will never pay ransom to terrorists. He argues that paying ransom would only help finance terrorists and encourage them to kidnap more Canadians abroad. Ridsdel's fellow Canadian hostage Robert Hall is subsequently beheaded in June. Trudeau later says dealing with the hostage crisis was the low point of his year.

May 18, 2016: The House of Commons devolves into chaos after Trudeau grows impatient with NDP stalling tactics to delay a vote on a government motion that would have given the Liberals unprecedented control over Commons proceedings. Trudeau marches across the aisle, grabs the arm of Conservative whip Gordon Brown and, in the process, accidentally elbows NDP MP Ruth Ellen Brosseau in the chest. Trudeau apologizes repeatedly and profusely. The motion is ultimately withdrawn.

May 31, 2016: Fisheries Minister Hunter Tootoo resigns from cabinet and the Liberal caucus to seek treatment for addiction issues. Tootoo later admits he'd had a consensual but inappropriate relationship with a female member of his staff.

June 2, 2016: Trudeau admits his government botched the launch of its promised electoral reform initiative by insisting on Liberal control over the all-party committee that is to recommend alternatives to Canada's first-past-the-post voting system. He frankly concedes his government was behaving too much like the previous Conservative government, which Liberals had roundly condemned for using its majority to impose changes to election laws. He agrees to give up the Liberal majority on the committee.

June 29, 2016: President Barack Obama heaps praise on Trudeau in an address to a joint session of the House of Commons and Senate.

Summer 2016: Trudeau is photographed shirtless after exploring a cave in Quebec's Gatineau Park with his family and again while on vacation in Tofino, B.C., where he accidentally photo bombs a beach wedding. Photos of the bare-chested prime minister attract international media attention.

Aug. 21, 2016: Health Minister Jane Philpott apologizes for repeatedly charging taxpayers for the use of a pricey luxury car service owned by a man who volunteered on her election campaign last fall. She promises to reimburse at least $3,700.

Sept. 20, 2016: Trudeau addresses the United Nations, urging political leaders to avoid exploiting fear and anxiety and to focus instead on things that unite people, such as promoting economic growth and job creation. The speech is part of an effort to rebrand Canada as a constructive partner of the UN, after years of thinly veiled disdain by the Harper government. Trudeau wants Canada to win a seat on the UN Security Council in 2020.

Sept. 22, 2016: Trudeau's two top aides — chief of staff Katie Telford and principal secretary Gerald Butts — apologize for claiming excessive moving expenses when they relocated their families from Toronto to Ottawa after the Liberals took office. The pair had claimed a combined $207,000. After days of opposition criticism, they agree to reimburse a total of $65,000.

Sept. 27, 2016: In its first major energy policy decision, the Trudeau government approves construction of the Pacific NorthWest LNG (liquefied natural gas) export terminal near Prince Rupert, B.C. and the associated pipeline, subject to conditions to mitigate its environmental impact. The decision angers some First Nations leaders and environmentalists who oppose the project.

Oct. 3, 2016: Trudeau announces that the federal government will unilaterally impose a price on carbon pollution — a floor price of $10 a tonne starting in 2018 and increasing to $50 a tonne by 2022 — in provinces and territories that fail to adopt their own carbon pricing plan. All revenue from the federal pricing regime is to be returned to the provinces or territories in which it is generated.

His surprise announcement prompts several walk-outs at a meeting of federal-provincial environment ministers and outrage from some premiers, particularly Saskatchewan's Brad Wall.

Oct. 30, 2016: Trudeau flies to Brussels to sign a Canada-European Union free trade deal, seven years in the making. Only a week earlier, the Comprehensive Economic and Trade Agreement, known as CETA, had seemed doomed by the Belgian region of Wallonia's objections, prompting International Trade Minister Chrystia Freeland to walk out of talks.

October 2016: Trudeau begins to take heat over so-called cash-for-access fundraisers where donors pay up to $1,500 to rub shoulders with the prime minister or one of his ministers. The events appear to contradict Trudeau's own guidelines for ethical conduct, which stipulate that “there should be no preferential access or appearance of preferential access” in exchange for political donations.

Trudeau defends the practice, arguing that federal political financing rules, including disclosure requirements and strict caps on donations, prevent any appearance of conflict of interest. The controversy escalates throughout the fall and continues to dog Trudeau going into the new year.

Nov. 8, 2016: Donald Trump triumphs in the U.S. presidential election, stunning pundits and pollsters and turning the Canada-U.S. relationship on its head. Trump, a protectionist, anti-immigration populist who doubts the science of climate change and has routinely demeaned women, changes the equation for the Trudeau government on a host of issues, from carbon pricing to pipelines.

Nov. 14, 2016: Trudeau and a raft of senior ministers meet with some of the world's most powerful institutional investors in a bid to persuade them that Canada offers a stable economic and political environment in which to safely invest. The summit is central to Trudeau's goal of turning Canada into a magnet for foreign investment and attracting billions in capital for a new infrastructure bank his government is creating to fund "transformative" projects across the country.

Nov. 22, 2016: The government announces it will purchase 18 Super Hornet jet fighters as a stop-gap measure while it launches an open competition to find a permanent replacement for Canada's aging CF-18 fleet, a process that could take up to five years. Trudeau had promised during the 2015 election that a Liberal government would scrap the Conservatives' plan to purchase costly F-35 stealth fighters.

The decision prompts cries of betrayal from environmentalists and some indigenous leaders.

Trudeau tries to soften the blow by simultaneously nixing the Northern Gateway pipeline across northwestern B.C. and imposing a promised oil tanker ban on the northwest Pacific coast.

Dec. 1, 2016: The opposition-dominated special committee on electoral reform recommends the government design a proportional voting system and hold a national referendum to gauge support for it. Liberal members of the committee recommend Trudeau abandon his promise to reform the electoral system by the next election in October 2019, saying there's no consensus among Canadians and not enough time to make such a radical change.

Democratic Institution Minister Maryam Monsef dismisses the report, insists there's no consensus and mocks opposition parties for not recommending a specific new voting system. She apologizes the following day for her insulting tone but sticks by the substance of her response to the committee's report.

Dec. 5, 2016: Monsef launches an online survey on electoral reform, which does not ask participants about any specific voting model but rather purports to elicit the values Canadians want to underpin their democracy. The survey is mocked ruthlessly in social media and by opposition parties who suspect it's designed to either allow Trudeau to renege on his promise of electoral reform or promote a ranked ballot system, for which he has in the past expressed a preference.

Dec. 9, 2016: After a day-long first ministers' meeting, Trudeau declares victory in his bid to craft a pan-Canadian plan to combat climate change. But Saskatchewan Premier Brad Wall refuses to be part of any plan that includes imposing a price on carbon and threatens to go to court if the federal government imposes a carbon tax on his province. Manitoba's Brian Pallister also refuses for the time being to sign on, to protest the lack of an agreement on health care funding.

Dec. 13, 2016: A federal task force on legalization and regulation of marijuana recommends storefront and mail-order sales to people 18 and older, with personal growing limits of four plants per person and a 30-gram limit on personal possession. The government has promised legislation in the spring.

Dec. 19, 2016: A meeting with provincial and territorial health and finance ministers ends in acrimony after Finance Minister Bill Morneau rejects demands that the annual federal health transfer to the provinces continue to increase at a rate of six per cent per year. He pulls his offer — 3.5 per cent annual increase in the transfer, plus $11.5 billion over 10 years in targeted funding for home care and mental health — off the table, reverting to his original plan of a three per cent escalator plus an undetermined amount for home care and mental health for provinces that choose to strike a bilateral deal. Premiers renew calls for a first ministers' meeting on the issue.