By Julie Pace And Deb Riechmann, The Associated Press — The Canadian Press — Jan 6 2017 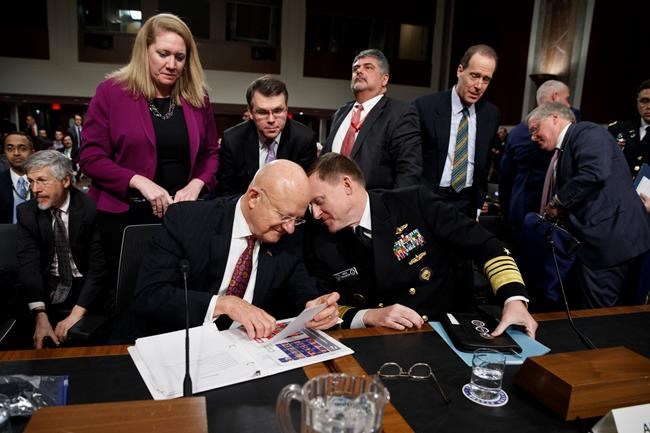 WASHINGTON — A briefing from the nation's top intelligence officials to President-elect Donald Trump was underway Friday, a meeting in which the officials planned to make their most detailed and persuasive case yet that Russia's government interfered in the November election.

Without seeing the intelligence, Trump dismissed the findings and told The New York Times the focus on Russia's involvement is a "political witch hunt" by adversaries who are embarrassed they lost the election. "They got beaten very badly in the election," Trump told the Times. "They are very embarrassed about it. To some extent, it's a witch hunt. They just focus on this."

A declassified version of the report is expected to be released on Friday afternoon, according to one U.S. official, who wasn't authorized to comment publicly and requested anonymity.

On Capitol Hill, the intelligence officials and lawmakers refused to comment when they left the briefing for lawmakers. Asked how the briefing went, National Security Agency Director Adm. Mike Rogers responded, "Have a nice day."

House Minority Leader Nancy Pelosi, D-Calif., said the intelligence report was "quite a stunning disclosure" and said parts will be released today, though she didn't provide any specifics. She made the comments at her weekly Capitol Hill news conference.

Upset that NBC released information about the hacking, Trump tweeted: "I am asking the chairs of the House and Senate committees to investigate top secret intelligence shared with NBC prior to me seeing it." NBC reported that intelligence officials have identified proxies that Russia used to pass hacked Democratic emails to WikiLeaks, which then released them to the public.

Since winning the election, Trump has repeatedly questioned intelligence officials' assessments that Russia was behind the hacking of the Democratic National Committee and individual Democrats like Hillary Clinton's campaign chairman John Podesta.

Trump remained dubious about the assertion even on the eve of his intelligence briefing, asking how officials could be "so sure" about the hacking if they had not examined DNC servers.

The Washington Post, citing anonymous U.S. officials, reported Thursday that intelligence agencies have identified parties who delivered stolen Democratic emails to WikiLeaks. The officials also said there were disparities between efforts to infiltrate Democratic and Republican networks, and said the U.S. intercepted communications in which Russian officials celebrated Trump's victory. It was not clear which of those details were included in the classified report.

Sean Spicer, whom Trump has chosen as White House communications director and press secretary, said the billionaire businessman will go into Friday's meeting "prepared to listen and understand how they got to the conclusions." Asked on ABC's "Good Morning America" if Trump would have an open mind, Spicer replied, "100 ."

"The president-elect, I think, has a healthy skepticism on everything," the spokesman said, adding that "a rush to judgment is not in the country's best interest."

"I think the idea that he's approaching this in a very logical, very methodical way ... is the right way to go about it," Spicer added.