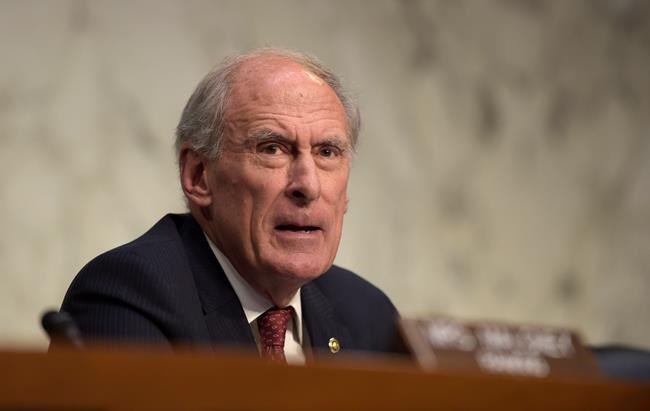 WASHINGTON — President-elect Donald Trump on Saturday said he wanted retired Sen. Dan Coats to be national intelligence director, describing the former member of the Senate Intelligence Committee as the right person to lead the new administration's "ceaseless vigilance against those who seek to do us harm."

Trump's announcement came one day after release of a declassified government report on Russian efforts to influence the presidential election. The report predicts Russia isn't done intruding in U.S. politics and policymaking.

Trump wants to improve relations with Russia and repeatedly has denounced intelligence agencies' assessment that the Kremlin interfered in the election, when he defeated Democrat Hillary Clinton. But the report released Friday explicitly ties Russian President Vladimir Putin to the meddling and says Russia had a "clear preference" for Trump over Clinton.

Coats, an Indiana Republican, will await Senate confirmation to head the office, which was created after the Sept. 11 attacks to improve among U.S. spy and law enforcement agencies. Coats now finds himself in line to be at the of an intelligence apparatus that the president-elect has publicly challenged.

Trump said in an early morning statement that Coats "has clearly demonstrated the deep subject matter expertise and sound judgment required to lead our intelligence community." He said Coats "will provide unwavering leadership that the entire intelligence community can respect, and will spearhead my administration's ceaseless vigilance against those who seek to do us harm."

Coats, in a statement released by Trump's transition team, said: "There is no higher priority than keeping America safe, and I will utilize every tool at my disposal to make that happen."

Trump's team has been examining ways to restructure intelligence agencies as part of an effort to streamline operations and improve efficiency, but Coats' nomination could ease fears that Trump would push for a significant overhaul.

Coats, 73, is a Capitol Hill veteran who served eight years in the House before moving to the Senate in 1989 to take Dan Quayle's place when Quayle became President George H.W. Bush's . Coats stayed in the Senate until 1998, then left to become a lobbyist.

Coats, who earned $600,000 in his final 13 months at King & Spalding, downplayed his lobbying work when he returned to Indiana for a successful Senate comeback bid in 2010. He served one term and did not seek re-election last year.

Coats was a vocal critic of Russia and pushed the Obama administration to harshly punish Moscow for its annexation of Crimea in 2014. When the White House levied sanctions, the Kremlin responded by banning several lawmakers, including Coats, from to Russia.

Trump received a briefing Friday from intelligence officials on the classified report about Russian interference in the 2016 election, and he later told The Associated Press that he "learned a lot" from the discussions. But the president-elect declined to say whether he accepted the officials' assertion that Russia had intruded in the election on his behalf.