CNN at war with Trump over what reporting unleashed 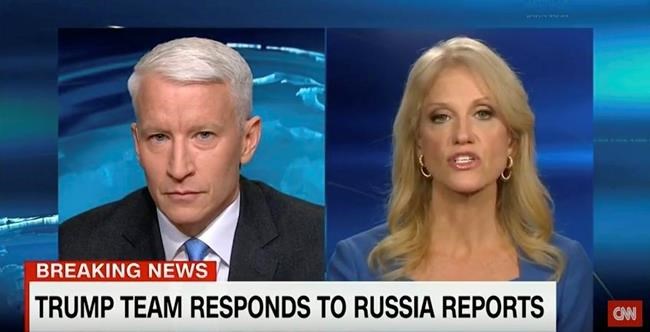 PASADENA, Calif. — A week before the inauguration, CNN is at war with an incoming president, not necessarily for what it reported but for what its reporting unleashed.

For all the noise — accusations of "fake news," the confrontation between Donald Trump and CNN's Jim Acosta at a news conference, false claims about what CNN had reported or linked to — that realization emerged toward the end of a remarkable 25-minute televised confrontation between Anderson Cooper and Trump adviser Kellyanne Conway.

When it reported on Tuesday that national intelligence officials had informed the president-elect that the Russians had collected a dossier on his , CNN did not specifically detail what that was because it couldn't vouch for its veracity. But it was CNN that gave BuzzFeed the cover to do so, Conway said.

"You got the party started," she said.

The question is raised: if one person unlocks a box and walks away, is that person responsible when someone else opens the box and removes its contents?

The dossier was reportedly prepared by a former Western spy as part of a political opposition research effort, and detailed supposed efforts by Russian intelligence to compromise Trump during visits to Moscow. Its existence and contents became known by some Washington leaders last fall, while the presidential campaign was still going on.

CNN and other news organizations had been investigating the claims about Trump for several weeks but the report did not become public knowledge because those details could not be confirmed. Intelligence officials had presented the claims in a report to Trump but said that they, too, had not determined whether or not they were true.

CNN would not have done a story about the dossier's existence if it hadn't learned that intelligence officials had considered it so important that it told Trump about it, the network's Wolf Blitzer said on Thursday. The CNN story was posted shortly after 5 p.m. EST on Tuesday.

Even though CNN did not reveal the specific details, the uncertainties surrounding the report and its origination as ammunition for political opponents should have sent up red flags, said Kathleen Hall Jamieson, a communications professor and the director of the Annenberg Public Policy Center at the University of Pennsylvania.

"Had I been asked to make the call at CNN, I would not have aired it," she said.

CNN argued that if the material was significant enough to be in the briefing documents, it was news. And many other organizations, including The New York Times and The Associated Press, followed it up with similar reports — also not revealing the specific details. Even Fox News Channel, in a statement by Shepard Smith, backed CNN.

BuzzFeed did not comment on Thursday, but its editor, Ben Smith, said in an MSNBC interview that reporters had been trying for weeks without success to confirm the veracity of the material. CNN's report changed the calculus.

"If there had not been a public conversation about secret documents that no one would be allowed to see, we would have continue to try to report this out," Smith said.

The BuzzFeed report quickly became the topic of a debate among journalists about whether it is proper to release material that has not been verified, indeed when there is real suspicion that some of it may be false, or if in a Wikileaks world all information is fair game. Smith told MSNBC that the media environment has changed "where you have to engage false statements," drawing a comparison to persistent questions raised about President Barack Obama's birthplace.

The timeline was the inverse of what has happened in the past with some news stories, like when the National Enquirer broke the story of former presidential candidate John Edwards' affair and mainstream news organizations hopped upon it.

Trump's anger toward CNN was apparent at his news conference Wednesday even before his tense confrontation with Acosta. He praised The New York Times for not reporting on the details included in the dossier, even though CNN had done the same thing. He tweeted Thursday that CNN "is in a total meltdown with their FAKE NEWS."

It hasn't escaped notice that Conway's argument — that CNN should be criticized because it "got the party started" — is similar to those his campaign rejected when critics said Trump's rhetoric gave implicit permission for supporters to be violent or abusive.

Cooper, in his confrontation with Conway, said CNN could not be held responsible if "shady organizations" like BuzzFeed put out their own material on the story. "We stand by our reporting 100 ," he said.

"CNN is not in any way responsible for what other people do and report other information they have," said Frank Sesno, a former CNN Washington bureau chief and a journalism professor at George Washington University. "Their responsibility is to report what they have."

What BuzzFeed did following that report is not CNN's problem, he said.

But it's less than a week before inauguration and the president-elect in on the warpath against CNN.

That is CNN's problem.