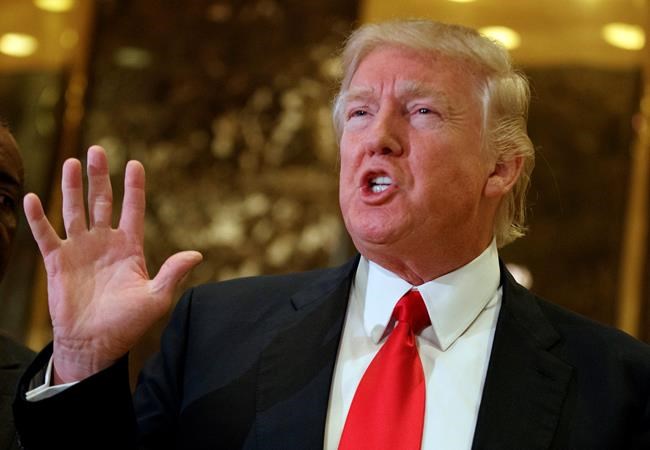 Military bands and units from all branches of the service, high school bands and even the Boy Scouts and Girl Scouts will join newly sworn-in President Donald Trump and Mike Pence in Friday's Inaugural parade.

More than 8,000 people are expected to follow the new president and as they proceed 1.5 miles from the swearing-in ceremony on at the Capitol to the White House on Pennsylvania Avenue, continuing a tradition that began with Thomas Jefferson in 1801.

The public can watch as bands and units from the five branches of the armed forces parade with high school bands and the Scouts from across the country, and military aircraft fly over their respective branch's parade units.

The Presidential Inaugural Committee announced details of the parade Monday.

The son of Dr. Martin Luther King Jr. says he had a "very constructive" meeting with President-elect Donald Trump on the holiday marking King's life.

Martin Luther King III played down Trump's recent claim that Rep. John Lewis, a civil rights icon, was "all talk." He told reporters at Trump Tower on Monday that in the heat of emotion, "a lot of things get said on both sides."

King says the focus of his meeting with Trump was to improve voter participation and stress the need to bring America together. He says Trump assured him it's his intent to reach out to all Americans, even those who did not support him.

Conservative media commentator Monica Crowley will not be joining the Trump administration following accusations of plagiarism.

That's according to a transition official.

Crowley had been slated to join Trump's National Security Council as a director of strategic communications. Her decision comes after CNN reported that several passages in a 2012 book written by Crowley were plagiarized. Publisher HarperCollins then pulled the book.

Crowley's withdrawal from her position was first reported by the Washington Times. The transition official confirmed the decision on the condition of anonymity because the official was not authorized to speak publicly about the matter.

President-elect Donald Trump is continuing to lash out at critics in the intelligence community and Democrats in Congress who are vowing to skip his swearing-in ceremony.

The tough-talking Republican questioned whether the CIA director himself was "the leaker of fake news" in a Sunday night tweet.

The extraordinary criticism from the incoming president came hours after CIA chief John Brennan charged that Trump lacks a full understanding of the threat Moscow poses to the United States.

Trump shot back in a Twitter post Sunday, saying: "Oh really, couldn't do much worse - just look at Syria (red line), Crimea, Ukraine and the build-up of Russian nukes. Not good! Was this the leaker of Fake News?"