O’Leary running to lead Conservatives; now to get them to support him 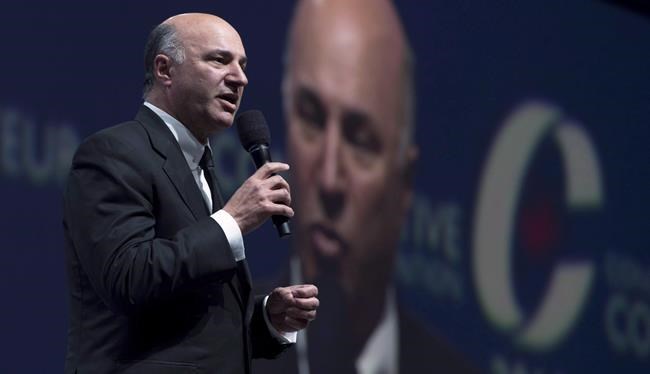 OTTAWA — A brash businessman-turned-reality TV star turns his outsized appetite for success towards the most powerful position in federal politics.

Canadians felt a shudder of deja vu Wednesday as Kevin O'Leary officially joined the Conservative leadership race, hoping his celebrity and private-sector experience will help him stand out from an already crowded field.

On that score — not unlike the president-elect south of the border with whom he is often compared — he should have no problem. One of the things he heard repeatedly from the 40,000 people who purportedly pushed him to run was that they want a prime minister who's not a politician.

"I've spent my whole life as an investor; I know what (Donald) Trump does, he knows what I do," O'Leary told The Canadian Press.

"I think we'll be very good together getting deals done because that's what matters."

Calgary businessman Len Baltiou, 50, one of the 40,000 people who reached out online to encourage O'Leary to run, agrees — so much so, in fact, that his comments ended up on a news release from the O'Leary campaign earlier this month.

But Baltiou, a self-described conservative, isn't actually a member of the party, nor does he plan to join, he said in an interview. Rather, he thinks O'Leary should run because none of the other 13 candidates would stand a chance against Trump.

"When you deal with a shark, you need a shark," he said — a reference to O'Leary's role on the U.S. reality TV show "Shark Tank," in which entrepreneurs compete for funding from a panel of would-be investors.

On television, people pitch their ideas to O'Leary. Now the shoe is on the other foot, with O'Leary pitching his ideas to Conservative party members, who will choose their new leader in May by way of a ranked-ballot election process.

A ranked ballot allows voters to make multiple choices. That means not only does O'Leary have to convince people to join the party to vote for him, but he also has to woo those supporting his rivals to check his name down-ballot.

Former Conservative Sen. Marjory LeBreton, a member of O'Leary's so-called exploratory committee, said a network of people is now fanning across Canada to engage riding associations, raise money and pave a campaign path for their candidate.

"It's late in the race," LeBreton acknowledged. "We've certainly got our work cut out for us."

Signing up new members will be one issue. Winning over existing ones is another.

"O’Leary’s narrow, materialistic vision has more in common with modern liberalism than it does with conservatism ... it is preoccupied with material needs unrooted from any moral or transcendental foundation," Ken Boessenkool and Sean Speer, two former advisers to former prime minister Stephen Harper, wrote in Maclean's magazine this week.

"Such a narrow vision would fracture the Conservative party’s successful political coalition. It would also diminish conservatism’s contribution to Canada's intellectual life."

Another major challenge will be language.

O'Leary first floated the idea of a bid months ago, but by waiting until Wednesday, managed to avoid Tuesday night's French-only leadership debate in Quebec City, one of the strongest pockets of Tory support in the 2015 election.

He said he now he wants to become more proficient in the language, though had previously said he didn't think bilingualism was a prerequisite for the job at all.

Even the prime minister has learned this week that bilingualism still matters — Justin Trudeau was soundly criticized for using French to answer a question put to him in English at a recent town hall debate in Quebec.

Some of O'Leary's competitors see him as a direct threat, notably leadership contender Lisa Raitt, who has established a "Stop O'Leary" website and circulated a list Wednesday of provocative past O'Leary sound bites — including the use of the term "Indian giver" on TV. He apologized after the CBC's ombudsman called the term "unambiguously offensive."

Others are taking a wait-and-see approach.

Quebec MP Maxime Bernier, who has been out campaigning for the leadership since last spring, appears unfazed by O'Leary's ambitions.

"And that's the most important: the members of our party will choose the leader."