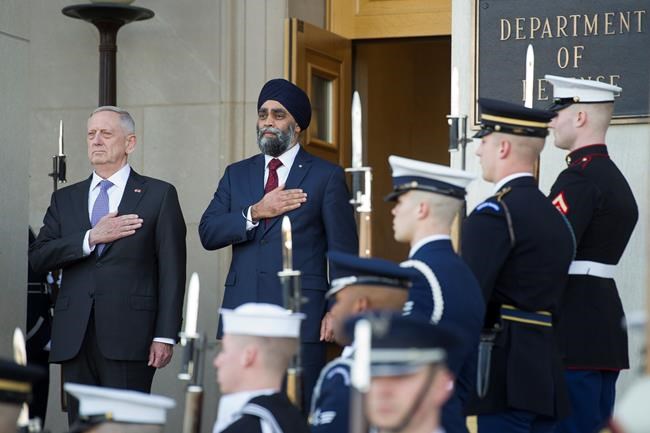 WASHINGTON — A first meeting between Donald Trump's defence secretary and his Canadian counterpart began well on Monday — so well that, within just a few seconds, there was already talk of kissing and hugging.

Newly sworn-in U.S. defence secretary James Mattis says he's so grateful for Canadian soldiers in Afghanistan he could have smooched them on sight.

At a meeting at the Pentagon, the retired general — nicknamed "Mad Dog" — said there's a reason his first phone call to a foreign counterpart was to Canada's Defence Minister Harjit Sajjan. The U.S. and Canadian military have been close allies since the Second World War, he said, and he experienced that bond personally in Afghanistan.

He noted that his own unit in Kandahar was relieved by Canadian soldiers from Princess Patricia's Canadian Light Infantry.

"They were a welcome sight," Mattis said as the meeting with Sajjan began.

"There was, 'Don't Ask, Don't Tell' in those days," he said, referring to the now-discarded U.S. policy on gays and lesbians in the military.

"(But) I was hugging and kissing every one of you guys coming off the plane."

He said the lives lost in the Afghan conflict have created a permanent bond between the countries. He also applauded Canada's humanitarian efforts: "Your pledge to do a lot of leadership, whether it be in humanitarian ops, in battle groups, in reassurance efforts, we're proud as all get-out of you and your forces and what they've stood up and delivered."

The message from Mattis was striking in its difference from that of his boss. At a separate event Monday, the president said he expects allies to start doing their fair share and spending more on their military.

Canada spends less on its military as a share of its economy than almost any member of NATO.

Sajjan was at the Pentagon for what was scheduled to be a 45-minute discussion on a broad range of topics including military co-operation both abroad and closer to home. Key questions were expected to include the ongoing commitment to NATO, defence spending levels, and peacekeeping operations.

The Canadian government delayed a planned peacekeeping deployment to Africa following the U.S. election, saying it wanted to first discuss a variety of global issues with its closest ally.

Trump's election has prompted uncertainty on several military fronts — he has suggested NATO is becoming obsolete, while at the same time demanding that NATO allies increase defence spending.

He repeated his complaints about NATO spending during a speech Monday at an air force base in Florida.

Trump said he supports NATO, but countries must pay their share.

"We only ask that all of the NATO members make their full and proper financial contributions to the NATO alliance, which many of them have not been doing," he said.

Trump has also been more supportive than his predecessor of Russia, which has caused anxiety in Eastern Europe.

Trump has sowed uncertainty on several defence issues. He's complained about the cost of the F-35, a staple of the U.S. fighter-jet program. Also, in his inauguration speech Trump heaped scorn on the U.S. habit of defending other countries.

Mattis spent last weekend in Asia, reassuring traditional U.S. allies. During the campaign, the president questioned why the U.S. should spend money securing Japan and South Korea — he went as far as to suggest, at one point, that they should get their own nuclear weapons.

Trump later dialled that back. But he said he wants allies spending more on defence. That was also the policy of the previous Obama administration and the former president even made that request in Canada's Parliament.

It's unclear where that conversation goes now.

Canada is 23rd among 27 NATO countries in terms of spending as a share of GDP. Canada's 2016 spending of 0.99 per cent of GDP was less than half the NATO guideline of two per cent, which only five NATO countries currently meet.

One Canadian-American military analyst said it's important to watch what Mattis says, while remembering he's not the boss: "(There's) the caveat of: I don't believe anything that Mattis says binds this administration," said Steve Saideman of Carleton University.

"Mattis is in the outer circle — and has been bypassed on major issues."