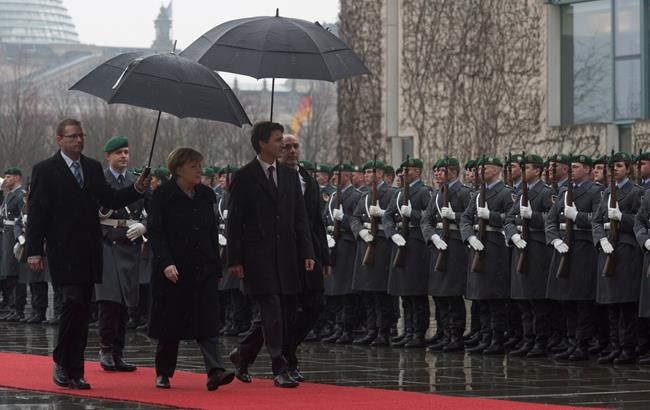 BERLIN — Canada's indifference to the ever-present push for more NATO spending was laid bare Friday in Germany as Prime Minister Justin Trudeau all but shrugged off Donald Trump's push to squeeze alliance members for more money.

Standing alongside German Chancellor Angela Merkel, whose country has already promised significant increases to its own NATO contributions, Trudeau suggested that when it comes to demonstrating Canada's commitment, money isn't everything.

He acknowledged the spending target agreed to in 2014 by the members of the 28-country transatlantic alliance — two per cent of GDP annually — but described Canada and Germany as principal NATO actors who do much of the "heavy lifting."

"There are many ways of evaluating one's contribution to NATO," Trudeau said.

Germany and Canada have "always been amongst the strongest actors in NATO," he said, citing Canada's leadership of a multinational NATO mission in Latvia aimed at strengthening its eastern flank against Russia.

He also said Canada is in the midst of "significant procurement projects" — fighter jets and shipbuilding, specifically — and working with NATO to ensure the alliance is being as effective as possible.

But Canada's position differs from the German message. Merkel said Germany answered the 2014 call by increasing its defence budget eight per cent over last year.

That will build on Germany's current 1.2 per cent of GDP, but there is no firm commitment that Canada's defence budget — which stands at 0.99 per cent of GDP — will receive a cash infusion any time soon.

Canadian government insiders feel they are winning the day in terms of persuading NATO allies that the Canadian contribution is more than the sum of its parts. They point to comments made by U.S. Defence Secretary James Mattis after his meeting with Defence Minister Harjit Sajjan, as well as language in the joint declaration from Trudeau and Trump after their meetings earlier this week.

"The United States values Canada's military contributions, including in the global coalition Against Daesh, and in Latvia," the statement reads, using one of the several names by which the Islamic State of Iraq and the Levant is known.

Notably, the statement makes no mention of any insufficiency in Canadian funds for NATO.

A Canadian government official who briefed journalists on the condition of anonymity prior to Trudeau's departure for Europe this week said Canada is "quite comfortable" with its current contribution to NATO.

Not so for Germany, said Merkel.

"This commitment hasn't changed to this day, so we intend to pursue this political course," she said through a translator. "Germany shows that it is ready and willing to acknowledge its responsibility in this respect."

Merkel did make a broader point about the importance of NATO's role in the world, regardless of who might be picking up the cheque.

Trump has called NATO obsolete, while U.S. Defence Secretary James Mattis delivered an ultimatum this week, saying the U.S. expects its allies to start spending more on defence or else it will "moderate its commitment."

Mattis also called on NATO put a plan in place this year that lays out a timetable for governments to reach the two-per-cent target.

Trump is far from the first U.S. president to lean on its NATO allies, German ambassador Werner Wnendt noted.

"We have heard this from previous presidents of the United States ... that they said there must be a fair burden sharing," said Wnendt. "That's well accepted in the alliance, so we will deliver."

During a June 2016 speech to Parliament in Ottawa, U.S. President Barack Obama softened his request of Canada by saying he wanted to see more Canada in NATO.

Prior to that, the Canadian ambassadors for former president George W. Bush were far more blunt in calling on Canada to pull its weight on defence.

With the thrill-a-minute U.S. presidency very much top of mind in Europe and elsewhere around the world, Trudeau's political-celebrity status was on full display Friday on the front of at least two German newspapers: "the anti-Trump is here" and "Sexiest politician alive," read the headlines.

Trudeau was given the same anti-Trump label on his March 2016 trip to Washington during the fractious U.S. presidential election campaign. As he did then, the prime minister refused Friday to wear that banner in Berlin.

Asked about his meeting with Trump, Trudeau reiterated his approach to seek common ground — and in the case of Canada, Germany and the U.S., he said, that means helping grow the middle class.

"There will always be differences of opinion ... (but) we can focus very clearly on the things we have in common: a desire to help our middle classes," Trudeau said.

One German parliamentarian pushed the anti-Trump point at the start of a meeting early in the day with Trudeau and a group of fellow lawmakers.

"With the rise of populism on both sides of the Atlantic, I believe it is more important than ever to strengthen our relations. Together we have to stand up for our common values," said German MP Klaus-Peter Flosbach.

Trudeau and Merkel also praised Canada's free trade deal with the European Union, just one way in which the two leaders are hoping to promote a progressive, pro-trade philosophy in the face of protectionist headwinds emanating from the United States.

Trudeau also paid a sombre visit to the rain-slicked German Holocaust Memorial. He and Merkel also visited the bustling downtown Berlin square, where 12 people lost their lives in December when a Tunisian asylum seeker rammed a truck into a crowd of holiday revellers.

Trudeau travelled to Hamburg for the St. Matthew's Banquet, a gala event with a 700-year history where his keynote address will warn top European business leaders to take concrete steps to address the rising populist angst or suffer the consequences.