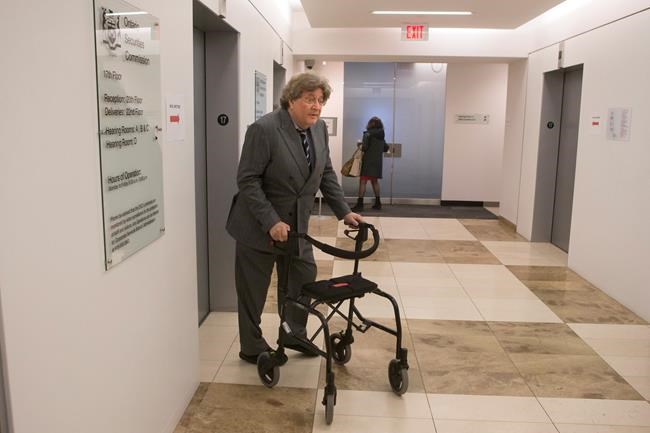 TORONTO — Several friends of Garth Drabinsky including a retired judge testified Thursday on his behalf, asking Ontario's securities regulator to show leniency to the disgraced theatre impresario for his role in the Livent Entertainment fraud nearly two decades ago.

"As a judge, I was always a merciful one who wanted to give people a chance — even though they may have done things they shouldn't have done — especially if they were remorseful," Allen Linden, a former Federal Court of Appeal justice, told a three-member panel at the Ontario Securities Commission.

Linden, who has been close friends with Drabinsky for more than 30 years and officiated his wedding, described the theatre mogul as Icarus, the character in Greek mythology who flew too close to the sun and got burned, testifying that the former Livent CEO has already been stripped of his reputation, finances and even his Order of Canada.

Drabinsky, 67, was found guilty of two counts of fraud in 2009 and sentenced to a five-year prison term for manipulating company financial statements and orchestrating a kickback scheme that cost investors an estimated $500 million.

The OSC is seeking to ban Drabinsky from acting as a director or officer of a public company and acting as or becoming a registrant in Ontario. It also wants to limit his participation in capital markets in Ontario.

Drabinsky's lawyer, Richard Shekter, said his client offered to settle the case but was turned down because the OSC didn't agree that he should be permitted to set up an RRSP or a family company that he can use to minimize personal taxes and assist with estate planning.

He argued that the sanctions sought by the OSC are so broad that it will also inhibit Drabinsky from speaking with investors, including those who are interested in his creative vision on future theatre productions.

Drabinsky is already working on two musicals, including "Sousatzka,'' which is seen as his chance at redemption in the arts world. It debuts as a preview Saturday in Toronto.

Vaughan Radcliffe, a professor of managerial accounting and control at the Ivey Business School at Western University, said the OSC has an opportunity to send a strong message to investors.

"Livent was one of the most notorious frauds in recent financial history in Canada and if they can't stop Mr. Drabinsky from having a role in capital markets, who can they stop?" Radcliffe said.

"It's important to realize that people lost money, many millions of dollars and there should be consequences for that."

Law professor Anita Anand agreed, adding that it's critical the OSC disciplines Drabinsky for his crimes.

"Historically, securities regulation in Canada has had the reputation of being weak on enforcement," said Anand, who teaches at the University of Toronto. Anand is also a special adviser to the board at the Canadian Foundation for Advancement of Investor Rights.

The OSC originally launched its regulatory case against Drabinsky in 2001, but it was put on hold while his criminal case concluded.

Two other executives, Gordon Eckstein and Myron Gottlieb, were also found guilty of fraud in the Livent scandal and later banned from serving as a director or officer of a public company under settlements reached with the OSC.

At its height, Livent produced shows across North America, the United Kingdom and Australia. The company sought bankruptcy protection in 1998 and was sold off in 2001.