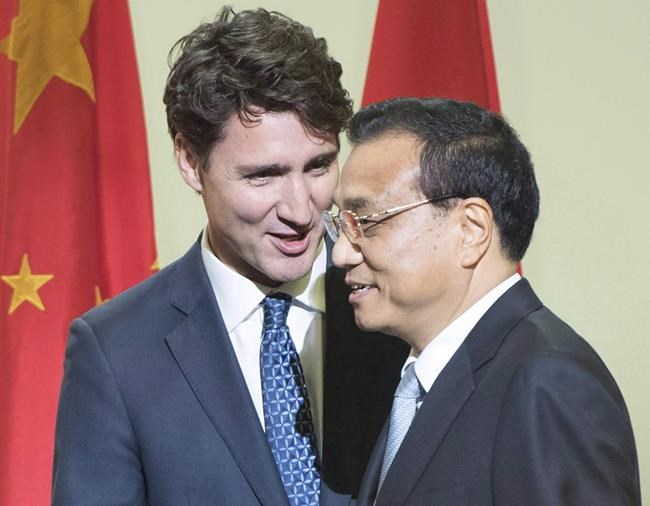 OTTAWA — The federal government wants Canadians to air their concerns about China's human rights record as part of broad consultations on a possible free trade deal.

Business leaders are also being asked to weigh in on a major cybersecurity issue: how to minimize the possibility of the Communist government prying into their commercial dealings in China.

The Liberal government served notice in recent days that it wants to hear from a broad range of Canadians on the proposed free trade deal.

Canada's economic ambitions for deepening trade with China have always clashed with concerns over the intolerance of dissent and crackdowns on freedom in the People's Republic.

Alex Neve, secretary general of Amnesty International Canada, called on the government to commission an independent assessment of the impact that any proposed trade deal would have on human rights.

"It's a story the Chinese government frequently seeks to mask by pointing to the economic growth that the country has seen in recent decades and the huge numbers of people who have been lifted into the middle class," he said.

"And somehow that explains away everything and anything about human rights ills in China."

The government notice says "Canadians may have concerns about China, including issues relating to the environment, labour, gender equality, rule of law and human rights." It says Canada needs to raise those issues with China in order to have a "healthy relationship."

"A free trade agreement with China would not deter Canada from urging and working with China to meet its international obligations in these areas," it says.

Neve said he expects many non-governmental organizations such as his to answer the government's call for input, issued this last week.

Canada's leading business group for fostering relations with China says it too has concerns about moving forward with a full-fledged trade deal.

Sarah Kutulakos, executive director of the Canada-China Business Council, said the government needs to address the cybersecurity concerns that many foreign companies have about doing business in China.

Without them, companies can't guarantee the protection of corporate data and other sensitive information, Kutulakos said in an interview.

"We don't tell Chinese companies what sort of systems they can and can't use when they come to Canada, so we also shouldn't be limited in that way."

The key issue for Canada, said Kutulakos, is to create a clear set of rules that can guide companies in the uncertain and complicated Chinese landscape. "If we have made a specific agreement that these are the rules, and we can track how they're being followed, it increases certainty, lowers risk and it hopefully makes doing business there, easier."

Neve said if the government is determined to pursue a trade breakthrough with China, it has to do more than pay lip service to human rights.

"If we're now going to get serious in a formal way about our trade relationship with China, then we have to get equally serious and formal about where human rights sit in that relationship."

A spokesman for International Trade Minister Francois-Philippe Champagne said the government isn't making any decisions until it has heard from Canadians.

Spokesman Joseph Pickerill said formal consultations will take place over 90 days and will include meetings across the country. Depending on what comes out of that, the government is open to "additional consultations," he added.

In addition to business and civil society groups, the government is reaching out to labour unions, academics, indigenous groups, provincial and territorial governments and individual Canadians.