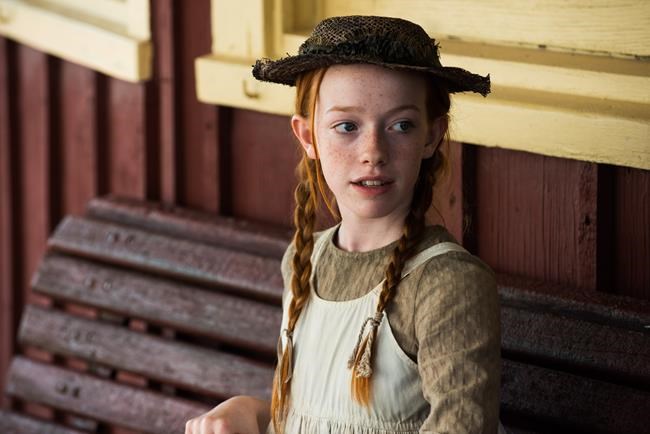 TORONTO — The chatty Canadian dreamer that is Anne of Green Gables is internationally beloved for her cheery qualities: a big imagination, bold spirit and face full of freckles.

But the new series "Anne," debuting Sunday on CBC and later this spring on Netflix elsewhere in the world, unearths a dark chapter of her life that shaped her resilience.

Flashbacks show the vicious abuse and bullying the pigtailed redhead endured in orphanages and foster homes before being reluctantly taken in by aging siblings Marilla and Matthew Cuthbert in Prince Edward Island in the late 1890s.

"I think this show is a little bit more honest, even if it is brutally so," said Amybeth McNulty, an Irish-Canadian who stars as 13-year-old Anne Shirley.

"There's more honesty about the abuse that she goes through and the trauma that she went through. I think it also gives you a more in-depth sense to who she is and how she fights through all that.

"It's even more empowering, because you think if you went through so much — if you went from house to house to house of strangers to orphanages, asylums and so much trauma — and to come through it with such a beautiful spirit that Anne has, I think it's lovely to see that."

Shot in P.E.I. and Ontario, it features stunning landscapes — and there's another bit of Canadiana in the choice of song to accompany the opening credits: the Tragically Hip's "Ahead By a Century."

Walley-Beckett said she hopes all generations will enjoy the show in a co-viewing way, noting it's not dialled down for kids.

"In this day and age, themes of identity, prejudice, bullying, being an outsider, searching for a way to be accepted and how to belong are entirely topical and super relevant, and those are themes that are built into the story of 'Anne.'

Of course, there have been previous onscreen versions of Anne's story, including a heralded 1985 miniseries starring Megan Follows and two recent YTV films.

Ultimately, it's a story of a girl who is fiercely unique, independent, determined and doesn't see any barriers for herself, said executive producer Miranda de Pencier.

"I think the classic idea of: it's not how we succeed, it's how we face and overcome our challenges and the pain and the difficulties that come against us," said de Pencier, whose credits include "Thanks For Sharing" and "Beginners."

"Anne is a survivor. She's someone ... that stays positive in the face of real crushing difficulty and that's inspiring."

They chose McNulty, whose mother was born in Calgary, because "she's luminous, she's transparent and she's smart and soulful and emotional," said Walley-Beckett.

"She also has to carry her words, which are not for the faint of heart," said de Pencier. "The dialogue is incredibly thick and dynamic and beautiful."

"This is a very odd brother and sister who live on the edge of nowhere, so there's a lot of (gossip) about them, so to speak," said Thomson.

"There's the attitude of the local society onto these two people," added James, a four-time BAFTA nominee.

"I was at the Women's March in Toronto recently and it was wonderful to see everyone together and really fighting for what everybody deserves," she said.

"And I like how this (series) brings it forward. I have a line that says, 'Girls can do anything boys can do — and more,' and it's so true."