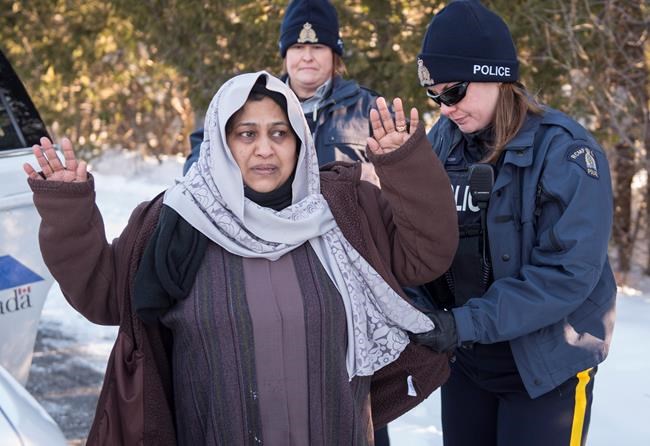 OTTAWA — Data released today shows that the RCMP have arrested nearly half as many illegal border crossers this year as they did in all of 2016.

Figures provided by the federal government show that in the first two months of this year, the RCMP intercepted 1,134 people.

Statistics previously provided by the Immigration Department had revealed 2,464 were apprehended in 2016.

The only other province where Mounties stopped illegal border crossers this year was Saskatchewan, where five people were apprehended in January.

While the RCMP arrests illegal border crossers, how many of them actually go on to lodge asylum claims in Canada is unclear.

Tracking asylum claims is the work of the Canada Border Services Agency and the Immigration Department and in their statistics they don't separate out how an asylum seeker arrives.

The difference in the statistical approaches has created some confusion around the extent of the illegal border crossing issue and where it fits in the overall number of asylum claims being filed in Canada.

In the first two months of this year, 5,520 claims for asylum have been filed in Canada, compared to 23,895 for all of last year, according to figures released Tuesday.

A spokesman for Public Safety Minister Ralph Goodale says the data released Tuesday will now be updated monthly in a bid to provide clear and consistent figures.

Immigration Minister Ahmed Hussen told MPs Monday that a deeper dive into the backgrounds of those crossing between official ports of entry suggests the political atmosphere in the U.S. isn't what's driving them.

He said many of those apprehended in Manitoba had been in the U.S. for less than two months and had always intended to make Canada their final destination.

"This is definitely not specific to the incoming U.S. administration," he said.