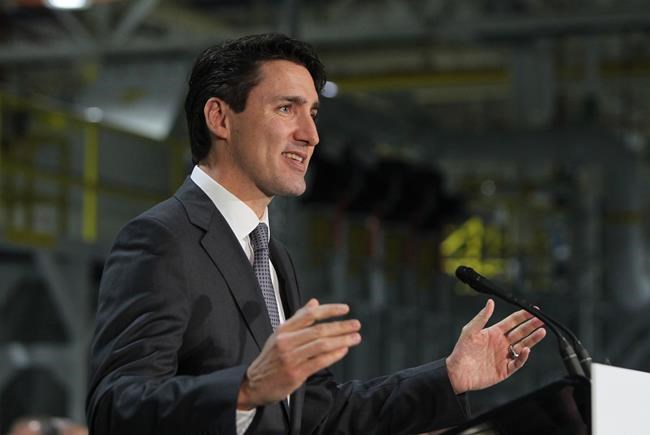 After touring a Magna auto parts facility in Brampton, Ont., Trudeau was asked several times how he can justify the $372.5-million loan package announced in February for Bombardier's CSeries and Global 7000 aircraft programs.

"We respect the free market and the choices that companies will make," Trudeau said. "But we also have a responsibility to ensure that the investments we make with taxpayers' dollars are leading to good jobs and growth."

Total compensation for the Montreal-based manufacturer's top five executives and board chairman Pierre Beaudoin was US$32.6 million in 2016, up from US$21.9 million the year before, according to a proxy circular ahead of Bombardier's annual meeting on May 11.

CEO Alain Bellemare received US$9.5 million, up from US$6.4 million in 2015, including US$5.2 million in share and option-based awards and a US$1 million salary. His annual bonus almost doubled to US$2.36 million.

Beaudoin's total compensation increased to US$5.25 million from US$3.85 million a year earlier.

"Fundamentally, it concerns the company and its shareholders," said Couillard, whose government has provided a US$1-billion investment in the CSeries in exchange for a 49.5 per cent stake. But he questioned, from an employee standpoint, whether the timing behind such raises and the message it sends was "well chosen."

"If I were Bombardier, I would think about the message I am sending the population today," she said in question period. "I can understand people being unhappy and upset."

The three opposition parties represented in the national assembly — the Parti Quebecois, the Coalition for Quebec's Future and Quebec solidaire — asked the government to voice its objection to the hikes.

PQ Leader Jean-Francois Lisee said the company's top executives should not be allowed to get the extra millions in remuneration.

"This is a slap in the face for Quebecers," Lisee said. "There is a kind of organized indecency at the top of big companies where people give themselves salary increases after destroying the bread and butter of thousands of Quebecers."

Meanwhile, Quebec's pension-fund manager, which holds 30 per cent of Bombardier Transportation and about 47.6 million shares in the company, did not comment directly on the increases but noted the importance of the "link between performance and remuneration."

"That is the case for every company in which we invest, including Bombardier," said Maxime Chagnon, senior director of media relations at the Caisse de depot et placement.

"We will thoroughly analyze the proxy circular that was sent to shareholders."

In its regulatory filing, Bombardier (TSX:BBD.B) attributed the higher compensation to a number of factors, including achieving profit and cash flow targets, securing CSeries orders and completing the first flight of the Global 7000 business jet.

Bellemare was also credited with achieving earnings at the high end of the company's guidance, exceeding profit margin targets in all business segments and making significant progress on achieving the company's plan to revive its fortunes.

The company also pointed out that all of the executives were hired at various times in 2015 as part of a corporate renewal Bellemare put in place after he started in February of that year. A spokesman added that a large portion of the compensation is not guaranteed.

Bombardier is in the midst of a five-year turnaround plan that has involved mass layoffs as it tries to regain its financial footing. It is eliminating 14,500 jobs around the world by the end of next year.