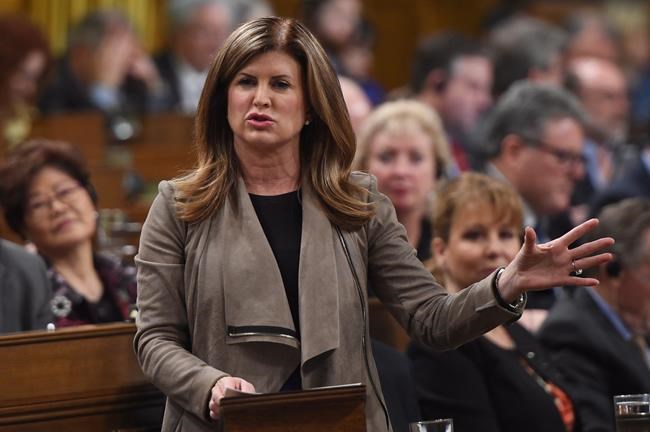 Rona Ambrose met Commerce Secretary Wilbur Ross during a visit to Washington on Monday. She said Ross acknowledges not only the value of the Canada-U.S. business relationship, but also the need to provide stability and business confidence.

''I felt reassured that I could go back to the business community . . . (and say he is) someone who understands business confidence. That's reassuring.''

That desire to calm the business-investment climate is one reason the interim Conservative leader says she favours a faster renegotiation of the North American Free Trade Agreement.

Some observers suggest a go-slow attitude might favour Canada — let the clock tick down toward the election in Mexico and, facing the prospect of a Trump-bashing leftist getting elected there, Trump might feel cornered into delivering a quick deal.

She expresses two qualms with the go-slow attitude. First, it extends uncertainty. She points to NAFTA, U.S. tax reforms, Buy American talk and the softwood dispute as multiple ingredients in a recipe for investor concern: ''We know there are already people holding off business decisions because of this.''

Her other problem with it: more delay could impair relations with Mexico, she says.

If the issue lingers deep into the Mexican election, she says it could mean more anti-Americanism on the campaign trail, more protectionist talk and potentially weaken the continent's competitiveness against other trading blocs.

''We have to think bigger picture,'' she said.

Ambrose was accompanied in her meeting with Ross by the Liberal-appointed ambassador to the U.S., David MacNaughton.

She has made clear her party will work with the government during the NAFTA negotiation, and not use it for partisan advantage. As one example of that co-operation, she said she and Foreign Affairs Minister Chrystia Freeland have been speaking about getting MPs who work on a parliamentary trade committee to travel throughout the U.S. to point out mutually beneficial trade relationships.

Ambrose says it's a matter of national interest.

She has written to Prime Minister Justin Trudeau, offering her own party's contacts and expertise gained while in government. She said her party will likely maintain that less-partisan posture as long as NAFTA's fate remains uncertain.

''Park partisanship over here,'' Ambrose said in the interview.

''I represent Canadian families, and workers, and business people — who are anxious about what a border adjustment tax could do . . . and they're worried about what would happen in a renegotiation of NAFTA. . . .  I'm not here to negotiate. That's the government's job. I'm here to make the case for jobs. . . .

''We'll be a united front. We're Conservatives, but we want a good agreement for Canada.''