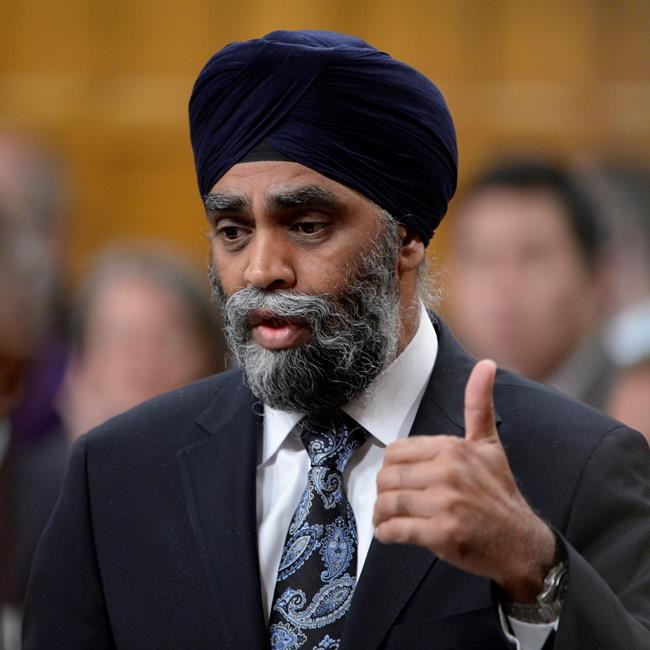 "As any good allied partner does, we will look at that request," Sajjan said Monday after a news conference highlighting the Defence Department's new, 10-year defence policy, which was rolled out last week.

"Our focus right now is on our mission in Iraq and the region. We will be moving forward with that mission."

Sajjan said even though Canada continues to provide funding for development and security personnel in Afghanistan, the military mission there ended three years ago.

The conflict claimed the lives of 158 Canadian soldiers, one diplomat and one journalist between 2001 and 2014. Thousands of those who served there continue to suffer from physical or mental injuries, an issue that continues to make headlines across the country.

However, the United States and NATO are reaching out for more help in Afghanistan now that the Taliban appear to be making a comeback in the region. As well, the arrival of the Islamic State of Iraq and the Levant has complicated matters. During the past year, the group has launched deadly attacks across the country.

As for Iraq, Sajjan says Canada remains committed to maintaining a long-term military presence in that country, but he followed up by suggesting some changes were in order.

"For Iraq ... we are in this as a reliable coalition partner, in for the long term," the minister said as he answered questions from reporters gathered at Her Majesty's Canadian Dockyard, along the west side of Halifax's sprawling harbour.

"We're going to make adjustments to the mission ... We have taken this year to review the evolution of the situation on the ground. We will be extending the mission, but we'll be making the final decision on this very shortly to outline what our contributions will be. One thing I can assure you: we will remain as a credible partner to make sure the coalition has all the right assets in place."

There are about 200 Canadian special forces soldiers deployed in northern Iraq. Though their mission is to train Kurdish fighters, they have engaged in gun battles in Iraq.

The federal government has confirmed that in March some of the special forces took part in the battle to reclaim the Iraqi city of Mosul from ISIL.

Overall, the new policy commits Canada to spending an extra $14 billion over the next 10 years on defence matters — a 70 per cent increase for the department's budget.

The money will be used to put another 5,000 troops in uniform and, among other big-ticket items, offset the skyrocketing cost of buying new warships and fighter jets.

But much of the money won't flow until after the next election, and it’s not clear whether the spending spike would mean bigger federal deficits or spending cuts in other areas.

Sajjan noted that two of Canada's new Arctic patrol ships were under construction at the nearby Halifax Shipyard, and he said his new defence policy commits the government to spending up to $60 billion on building 15 new warships, which will replace much of the Royal Canadian Navy's aging fleet.

"We are excited for the economic growth and development that this policy means for Halifax, Nova Scotia and the broader Canadian defence industry," he said. More than 14,000 Nova Scotians are employed as part of a "defence team" that spends $1.3 billion annually in the province, he said.

Sajjan said the original budget for the Canadian Surface Combatant program in 2008 was set at $26.2 billion, which the Parliamentary Budget Office later determined was enough for only six ships.

"We need 15 and we are committed to 15 ships," Sajjan said, adding that the policy also commits the government to maintaining the navy's four problem-plagued submarines and to build two new support ships.