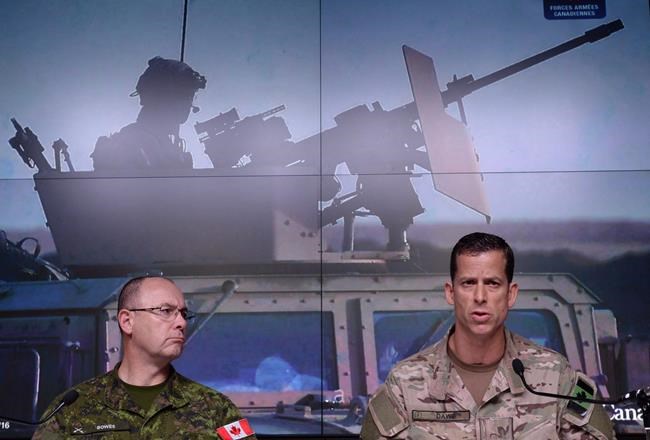 OTTAWA — The sniper who shattered the record for the longest confirmed kill also saved lives, the deputy commander of Canadian special forces said.

Brig.-Gen. Peter Dawe told The Canadian Press on Wednesday that fighters from the Islamic State of Iraq and the Levant were gathering for an attack on an unsuspecting Iraqi military unit when the Canadian commando fired the 3.5-kilometre shot.

The shot killed one fighter and sent the rest scattering for cover, effectively breaking up the attack.

"This attack was massing unbeknownst to our partner forces, because it was happening very quickly in a very dynamic sort of environment," Dawe said.

"And so our team was able to engage, and not only successfully that particular enemy fighter, but pre-empt a mass attack. So that's a significant achievement."

Dawe won't say much else about the shot, saying that could endanger the lives of Canadian soldiers in Iraq, though he did defend the amount of information made available about the overall mission.

"We've been very transparent to Canadians in terms of what our troops are doing. As transparent as we can be without compromising the welfare and the safety of our men and women deployed overseas."

Reaction to the record-breaking shot around the world has been mixed, with some current military expressing accolades while others have been in disbelief.

NDP Leader Tom Mulcair used the incident to rekindle previous allegations that the government has lied about whether Canadian troops are actually fighting a combat mission in Iraq.

But Prime Minister Justin Trudeau said the record should be celebrated as an example of the military's excellence while insisting that the mission in the battle-racked country is non-combat.

Dawe said the sniper was operating within the mission parameters laid out by the federal government, which includes shooting to defend friendly forces when needed.

"Canadian troops are not leading offensive operations," he said.

"But when you're advising and assisting, it's exactly what those two terms would suggest. To assist effectively means to also look after the partner forces with whom you're working."