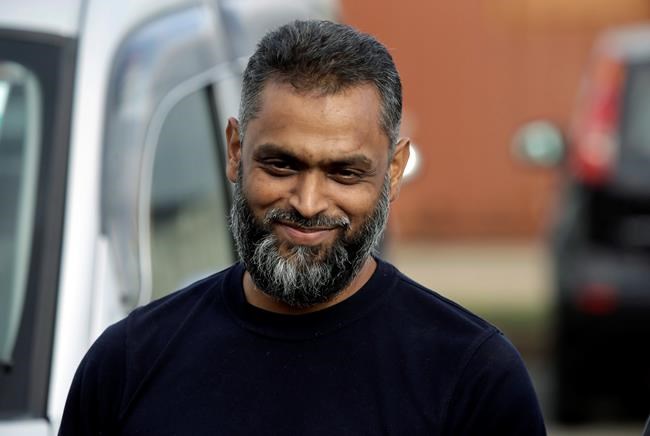 TORONTO — A British man compensated by the U.K. government for his torture and years of detention at Guantanamo Bay expressed dismay on Tuesday at the public and political furor in Canada over Ottawa's settlement with Omar Khadr.

Speaking from his home in Birmingham in the U.K., Moazzam Begg said Canadians instead should be proud of the federal government for the payment and apology to Khadr for breaching his rights.

"The nation shouldn't be upset about issuing an apology for something that's right," Begg told The Canadian Press. "If people are getting upset about that, I think they need to revisit what their morals and values are about."

Begg is one of 16 former Guantanamo detainees who settled lawsuits against the British government in 2010. The deal, while decried by some, aroused little of the anger seen in Canada over the Khadr settlement, announced last week, which sources said was worth $10.5 million.

For one thing, Begg said, Khadr's payment was far in excess of anything the Britons received — reportedly a total of about $30 million. For another, the allegations that he killed an American soldier in Afghanistan, were more serious.

Nevertheless, he said, Canada has led the way globally in how it has settled with Khadr and previously with others such as Maher Arar, who was sent by the Americans to torture in Syria.

"Canada has set the bar," Begg said. "It isn't about the amounts, though the amounts...are far, far greater. It's about the apology."

Now 49, Begg was kidnapped in Pakistan where he was living in early 2002, and turned over to American forces. They imprisoned him at Bagram in Afghanistan, where a horribly wounded 15-year-old Khadr was taken after U.S. soldiers captured him in July of that year.

Given the extent of Khadr's injuries, Begg said he could scarcely believe the Canadian teenager survived the battle in which Sgt. Chris Speer was killed and fellow Delta Force soldier Layne Morris was blinded in one eye.

In the ensuing months, Begg said he witnessed the mistreatment the Americans meted out to the "young child," despite his juvenile status.

"I was shocked at his treatment by a lot of soldiers," Begg said. "They would scream at him and drag him around. He was quiet and very patient. He never complained. I never saw nor heard a word of complaint from him — ever."

Like Khadr, Begg, then 33, was also taken to Guantanamo Bay. He spent about three years there before being returned to the U.K., where he and the others embarked on their legal quest to expose British complicity in their abuse and seek compensation for the unimaginable ordeal they were put through.

"We were all beaten, stripped naked, tortured in various ways," Begg said. "I had the sounds of a woman screaming next door in a cell that I was led to believe was my wife being tortured."

Documents would later come to light showing U.K. intelligence agents were present during interrogations and when the men were abused, although the British government admitted nothing.

Ultimately, the government opted to settle with the former Gitmo detainees. The deal was sold as a pragmatic solution that would avoid exposure of intelligence secrets and stop further financial bleeding given the $45-million the government had already spent fighting them.

While the amount paid is confidential, Begg said the money he received allowed him to repay loans he used to help rebuild his life and to pay people such as his father, who had spent thousands of dollars supporting him. It wasn't just compensation for the trauma, he said, it was for the "incalculable" financial harm he suffered. The settlement ran into some opposition in the British parliament but public reaction was comparatively muted.

What rankles Begg, though, is the lack of an official apology from the British government.

"If there was a common denominator among the litigants, it was that we all wanted an apology," he said.

"Especially with an apology coming from (Canada's) prime minister — I can't stress that enough — that to all of us would have meant the most important thing: to get an apology from those who were in charge."

Khadr, now 30, pleaded guilty to five war crimes before a widely condemned military commission at Guantanamo Bay in 2010. He said he did so to get out of American hands and return to Canada in 2012, 10 years after he was taken to the U.S. prison. He was released on bail in 2015 pending his appeal of the war-crimes conviction.