Omar Khadr fights back at efforts by U.S. soldier’s widow to go after his assets 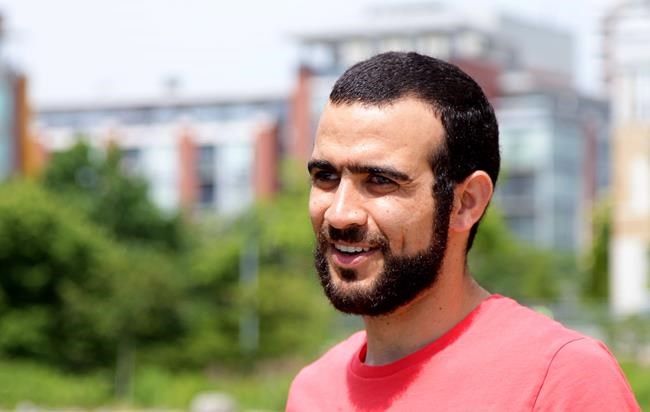 TORONTO — The widow of an American soldier killed in Afghanistan has failed to show there's a real risk former Guantanamo Bay prisoner Omar Khadr is hiding his money as a way to avoid paying people he might owe, new court filings show.

In urging Ontario Superior Court to dismiss a request for an injunction against Khadr, his lawyer argues Tabitha Speer and another former American soldier have not shown a strong case to back their demand for an urgent freeze on any money paid him by the federal government.

"The scant evidence offered in support of this pleading consists of double and triple hearsay statements drawn from media reports and Wikipedia," lawyer Nate Whitling writes in his factum ahead of Thursday's court hearing.

"The hearsay now relied upon by the applicants is so vague and unreliable as to be of zero probative value."

Speer, the widow of Sgt. Chris Speer, and Layne Morris, who was blinded in the 2002 firefight in which American forces captured the badly wounded 15-year-old Khadr, won a default US$134.1-million wrongful-death judgment against Khadr two years ago in Utah.

They are now trying to have the judgment enforced in Canada and want to go after Khadr's assets, including the widely reported $10.5 million sources have said the federal government paid him to settle his breach-of-rights suit against Ottawa.

Relying on newspaper stories is always a dangerous legal proposition, especially given that the courts have no way of assessing the credibility of the reports the applicants are citing in their materials, Whitling states in his factum.

Whitling's filing includes a reference to an email he sent to reporters at the Globe and Mail asking to be put in touch with an anonymous source quoted in a story that said Khadr had "legally sheltered" the government payout to prevent Speer's lawyers from getting at it. Whitling said Wednesday he's seen no response.

Part of the Speer application also calls on the court to force Khadr, who has refused to talk publicly about any money he was paid given the settlement's confidentiality requirements, to provide an accounting of his assets and financial affairs.

In response, Whitling argues no evidence of any "nefarious activity" by Khadr has been shown and his client has nothing to answer for.

"No adverse inference should be drawn from the fact that (he) apparently wishes to keep his private affairs private," the factum states.

The filing also heaps scorn on Speer's assertion that some of Khadr's relatives are "bad people" based on various news reports and Wikipedia pages. The "evidence" has no relevance to the case and comes nowhere near to any kind of "convincing proof," Whitling says.

Ultimately, he argues the American applicants have fallen well short of meeting the requirements for an injunction.

"It is insufficient for an applicant to raise a mere possibility that the defendant will hide or dissipate assets, since such possibilities exist in every case," his factum states.

He also notes the Americans have refused to provide an undertaking that they will cover any damages to Khadr if their application is unsuccessful.

The Utah judgment was almost entirely dependent on Khadr's confession to having killed Speer. The admission formed part of his 2010 plea bargain to five war crimes before a widely discredited American military commission in Guantanamo Bay, where he was held for 10 years.

Khadr never defended against the Utah case — he was in jail in Canada serving out the sentence handed him by the commission.

His factum notes it has always been "uncontroversial" that Khadr as a minor was detained without charge in a "legal black hole" and without access to a lawyer or family for years.

As a result, the American applicants have not shown a strong case for enforcement of the Utah judgment here given Canadian courts are statute barred from enforcing foreign judgments if they would be counter to Canadian public policy, the factum says.

"The applicants will undoubtedly ask this court to pretend that their Utah judgment is entirely independent from the (Guantanamo) prosecution and has nothing to do with the cruel and inhuman treatment inflicted upon (Khadr)," Whitling states. "But even a cursory review of the applicants' complaint refutes that contention."

Note to readers: This is a corrected story. A previous version said Speer's lawyer had written reporters about an anonymous source.