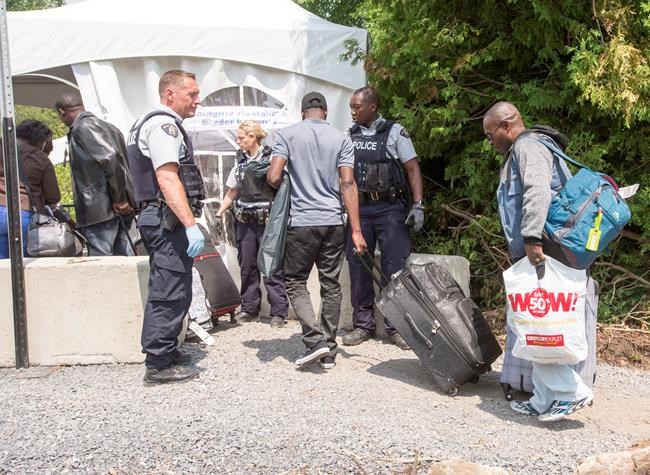 Trudeau took pains to reassure Canadians that the country has the resources and the capacity to deal with the sudden spike in asylum seekers that have crossed into Quebec in recent weeks.

But in a departure from his usual rhetoric on immigration, he also made it clear that anyone who is caught trying to enter the country illegally would be required to navigate the proper immigration channels.

"We want migration to Canada to be done in an orderly fashion; there's border checkpoints and border controls that we need to make sure are respected," Trudeau said during a visit to the Glengarry Highland Games in eastern Ontario.

"The people coming now irregularly will still have to go through all the proper processes."

Trudeau — clad in his grandfather James's "Sinclair" tartan kilt — said it's important for Canadians to know that the government is making sure the influx of people is being handled properly.

Canada remains an open and compassionate country when it comes to refugees, he said. But that's only possible, he suggested, when Canadian citizens know and understand that the system is working properly.

The number of people seeking asylum in Quebec has tripled in the last two weeks: while there were roughly 50 requests a day during the first half of July, the number has since surged to 150 a day.

The province says the new arrivals are putting pressure on temporary accommodation resources, which are necessary while the federal government decides whether each newcomer is eligible to make a refugee claim.

Trudeau said Immigration Minister Ahmed Hussen was on his way to Lacolle, Que., to ensure the necessary immigration staff and case workers are on the job.

"We are ensuring that the capacity to deal with these refugees is in place and our immigration system remains strong and robust."

Canadians know intrinsically the value that newcomers can bring to the country's community and its economy, he added.

"One of the reasons Canadians are open to immigration is because we know it has contributed to the growth of this country. Protecting Canadians' confidence in the integrity of our system allows us to continue to be open, and that's exactly what I plan to continue to do."

Quebec has asked Ottawa to speed up the claims evaluation process, since most of the cost of caring for the newcomers falls to the province in the meantime. For now, they are being housed at Montreal's Olympic Stadium, which has been set up to accommodate as many as 600 people until mid-September.

Most of those arriving at the stadium are of Haitian descent.

The exodus from the U.S. is being blamed on the Trump administration's expected plan to end a program that granted Haitians so-called "temporary protected status" following the massive earthquake that struck in 2010.

If the program isn't extended, as many as 60,000 Haitians could be sent back to their homeland.