Canada, Mexico shrug off Trump threat to blow up NAFTA 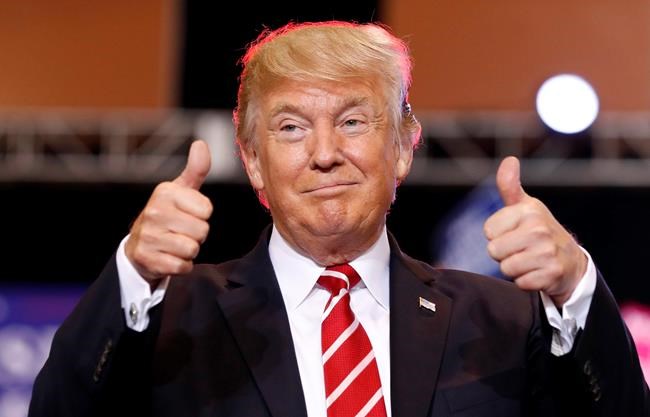 OTTAWA — Prime Minister Justin Trudeau is playing down the latest threat from President Donald Trump that the North American Free Trade Agreement is a bad deal from which the U.S. will likely exit.

Trump's latest threat to "terminate" NAFTA came during a campaign-style speech at a rally in Arizona on Tuesday night, when he told the crowd he didn't think a new deal on NAFTA good enough for the United States was possible.

It is not the first time he has made such a threat, but it is the first time since Canada, the U.S. and Mexico sat down to start renegotiating the 24-year-old trade agreement.

Trudeau's response Wednesday afternoon was to stay the course.

"We're going to stay focused on what we've always known and what we've always said, that the North American Free Trade Agreement has resulted in millions of good jobs on both sides of the Canada-US border and is of benefit to both Canadians and Americans," he said during a news conference in Montreal.

"There are opportunities we have to improve and update the North American Free Trade Agreement and we're negotiating in good faith and working hard to do just that, but we're going to stay focused on the hard work we have ahead of us at the negotiating table and that's how we've approached this from the very beginning and I don't see anything changing in that."

Canada's pro-NAFTA offensive in the United States has included intense lobbying to both state and congressional representatives with data showing nine million American jobs depend on trade and investment with Canada.

Foreign Affairs Minister Chrystia Freeland was unavailable to comment Wednesday, but she as good as predicted Trump would threaten to bail on NAFTA during her appearance before a House of Commons committee last week when she said there likely would be "dramatic moments ahead."

A Foreign Affairs official speaking on background said the only thing unexpected about Trump's NAFTA termination threat was that it came so quickly after renegotiations started.

"We knew it was very likely the president would play this card," he said. "We're not going to get rattled by this."

He said this was why the Canadian government has been working at developing relationships with others in the NAFTA circle in the United States.

"But if he threatens something and you overreact, he is going to come back and double down on it. You can't give it legs."

Mexico's foreign minister also shrugged off the Trump tirade as par for the course, initially tweeting that Mexico would remain at the table, calm and firm in Mexico's national interest.

Wednesday he told Mexican television Trump was "negotiating in his own particular style."

U.S. Trade Representative Robert Lighthizer said in a statement released by his office that "President Trump has been clear from the very beginning that if the NAFTA renegotiation is unsuccessful, he will withdraw from the agreement."

However at a town hall meeting at AT&T's Dallas headquarters on Wednesday, Rep. Kevin Brady, chairman of the House ways and means committee, called Trump's rhetoric "red hot" and acknowledged he'd like to see Trump take a "different approach in tone"

But he also suggested the people at the negotiating table are not working off Trump's's whims.

"The actions by his trade team are measured" he said. "They are following the trade objectives Congress gave them."

Back in Canada, Randy Hoback, the Conservative critic for Canada-U.S. relations, said Trump's comments might be more bluff than belief, but that doesn't mean they shouldn't be taken as a warning.

"It really puts the screws to everyone at the table to get something done quickly," said Hoback.

He said he hopes Canada can get a new deal done, but the government has to prepare for the possibility of NAFTA being torn up.

"We need to prepare for what we would do if NAFTA isn't there," said Hoback.

NDP international trade critic Tracy Ramsey also said the Liberals need to get some reassurances from the Americans they are bargaining in good faith, but be prepared for things to go off the rails.

"What are our contingencies here," she said. "Do we look at bilaterals with the U.S. and Mexico? This is something the Liberals have to give direction about."