NAFTA 2.0 – From the Halls of Montezuma

This week’s round of NAFTA renegotiation talks is occurring in Mexico City’s Grand Hyatt close by the Chapultepec Park, the site of the Famous Battle of the U.S. Marine hymn – the Halls of Montezuma. Notwithstanding the rumours, the battles inside the Hyatt have not reached military scale – or even fisticuffs.

Any real news is hard to come by in the lobby bar where the media waits in vain for a breakthrough – any breakthrough or a collapse and termination. Any sign of TV interest in nearly anyone creates a stampede.

Canada’s Intrepid Two, CTV’s Richard Madan and the Canadian Press’s Alexander Panetta, have been out and about daily with the Mexican people, gaining incredible insight and local flavor. The Mexican press has an insatiable interest in Ottawa and the advertised crunch round. 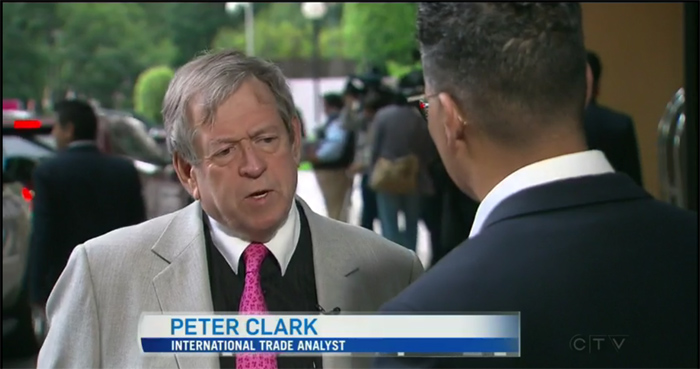 Instant communication around the world of President Trump’s every tweet and musing for the 2020 Presidential campaign makes NAFTA 2.0 an uncertain negotiation.

It is as if there really was a wall and it blocked out the Twitterverse and the incessant coverage of the Trump presidency in its electronic fishbowl.

Unfortunately, transborder communications are clear and Mexicans are bombarded with President Trump’s never-ending campaign rhetoric much like Canadians are. Trump’s recent musings and streams of unconsciousness about NAFTA termination have stirred emotions in Mexico – rising from a steady simmer to a slow boil.

NAFTA negotiations were an election issue in Mexico before this week – and political problems mount. Trump, whose popularity in Mexico is in red numbers, has now become an affront to Mexican national dignity.

Andrés Manuel López Obrador – who many consider will be the next President of Mexico – has said ‘don’t negotiate on NAFTA’ until he is in power.

Obrador, the Mexican Anti-Trump will play up every tweet and threat to his advantage. Other potential candidates have their own versions of push back.

It is clear that Mexico will:

– not negotiate through social media;

– not sign any agreement which will dilute its national dignity;

– cease negotiating as soon as DJT notifies of termination.

It is difficult to negotiate with a country whose leader is so singularly unpopular among the population of his closest neighbours that state visits for DJT are avoided – because his presence would provoke massive demonstrations.

Hosting the next G-7 in the Charlevoix area of Quebec will keep POTUS away from major population centres. Like when former PM Jean Chrétien hosted a Summit at Kananaskis – cougars and Grizzly bears being the natural security against expected protesters.

The Mexico Round was not meant to deal with delicate issues. It would have been better to chase after Wilbur Ross’s low hanging fruit. No experienced negotiator would allow himself or herself to be sand bagged by the spin on difficult issues.

It did not take long for the double cross to set in. Labour, Dairy access, Intellectual Property, NAFTA Chapter 19 have been raised, but without much detail. All issues are being discussed – because the limited timeframe makes this necessary. But this is normal in a negotiation.

It appears that the U.S. team is having some difficulty defining its asks. The details of the U.S. position are not clear, and may still be unclear after it is exposed. It is difficult to engage with a fog bank or to negotiate inside one. And it is dangerous, given Trump’s legendary disregard for contracts to consider anything not in writing and blanketed with Congressional stamps of approval.

The U.S. approach this week seems to be ‘you have both been abusing the U.S. through NAFTA for years – we are here to claw back your advantages and while we are at it, we will extract compensation for the 23 years of abuse’. The U.S. does not see any need to compensate for the claw back.

There is no room in the Trumpian mindset for any concessions to Canada or Mexico. Minister Freeland’s progressive proposals are seen as a ploy, a “too cute by half” attempt to stall. Clearly, the critics do not understand the importance of these issues to the Canadian Government.

Washington has set an absurdly short timeframe for the negotiations. The U.S. is not inclined to pay anything for its monumental demands. USTR is keen on using Trans-Pacific Partnership (TPP) texts – as the only way to finish in time. Canada and Mexico are not so anxious to rely on texts largely dictated by the U.S. in TPP – and which Canada accepted based on improved access to Japan.

Washington hopes to harvest some low-hanging fruit this session – with crunch time in Ottawa at the end of September – all the better to blame Canada for any failures or lack of progress. Harvesting is increasingly unlikely. There is no joy in Mudville but the negotiations are in the top of the second inning at best. The U.S. believes the negotiations should be in the bottom of the ninth with the bases loaded.

Trade negotiators are a patient lot – and an imaginative one if they are not tied into an 18th century mercantilist view of the world.

There is more than one ring in this circus. POTUS, with ICBMs crowding Asian skies and hydrogen bombs exploding next door, has been musing about terminating KORUS – the Free Trade Agreement between the U.S. and South Korea. Korea has been unwilling to discuss deficit reduction until the U.S. explains how KORUS has created the problem.

Korea is not prepared to buy Trump’s pig in a poke. Nor will Canada or Mexico.

In ring three, the Gang of Eleven (TPP minus the U.S.) has begun to strip away issues of interest to the U.S. from the TPP text. Start with a thumb in the eye for Senator Orrin Hatch’s priority demands on data protection for biologic pharmaceuticals. Canada and Mexico have each proposed additional modifications. You can bet the farm that neither is carrying Washington’s water.

Prime Minister Trudeau has once again called President Trump and committed Canada to the impossible dream of trying to close the deal to finish negotiating by year end. What else can we do? Even questioning the do-ability will be considered obstructionist.

Ambassador Bob (Lighthizer) and his counterparts have arrived for the September 5 Ministerial. He will not be pleased with the widespread impasses. The haranguing and berating will resume. But with the apparent disconnect between the negotiators and the White House, even Lighthizer will not likely be able to rescue the professional negotiators from their fabled “incompetence”.

There are two situations which could lead to at least a threat of termination. The first is if Ambassador Lighthizer does not get what he wants. The second is if he does get what he asks for and POTUS decides acceptance of U.S. positions means Lighthizer should have asked for more.

Ambassador Lighthizer did not bring any Marines with him to the Halls of Montezuma, but the Mexican mood is not improving. He would do well to remember that Mexico is essential to many shared programs related to border security and drug control – and that Montezuma got his revenge.