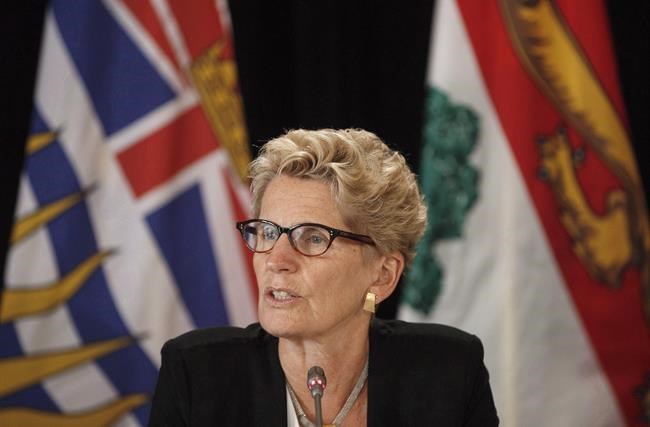 Two Ontario Liberals go on trial Thursday on Election Act bribery charges stemming from a 2015 byelection in Sudbury, but the stakes are also high for Premier Kathleen Wynne herself.

The Sudbury trial happens nearly simultaneously with another Liberal trial — related to the cancellation of two gas plants — which makes for terrible optics for the party. But while that second trial involves staffers for former premier Dalton McGuinty, the Sudbury scandal is one forged entirely under Wynne's tenure.

The premier herself is set to testify on Sept. 13.

Regardless of the outcome, it may focus the provincial election campaign — with a vote nine months away — on questions about the Liberals' integrity rather than their policies, she said.

In late 2014, the Sudbury riding became vacant when the New Democrat who won it five months earlier stepped down for health reasons. The Liberals had their eye on winning back a riding that until 2014 they held for about two decades.

Andrew Olivier, who was the Liberals' candidate in the riding in the general election, wanted to run again, but Wynne had other ideas. She ended up successfully luring the riding's NDP MP — Glenn Thibeault — to run for the provincial Liberals.

One of Sorbara's charges relates to an allegation she promised to get Thibeault "an office or employment" to induce him to become a candidate, which both deny.

Sorbara and Lougheed are alleged to have offered Olivier a job or appointment in exchange for stepping aside for Thibeault, who was ultimately given the post of energy minister last year.

Wynne has said that she had already decided Olivier would not be the byelection candidate by the time Sorbara and Lougheed spoke to him, therefore anything offered was not in exchange for stepping aside. Rather, Wynne says, she was trying to keep him in the party fold.

The trial may come down to the timing of that decision or a he-said-she-said, Verrelli said.

"I would imagine it also comes down to what Olivier believed and what both Sorbara and Lougheed believed that they could offer," she said.

"So Kathleen Wynne could have had her mind made up, the question is: was that communicated to her aides?"

When Olivier first raised the allegations in December 2014 he said Wynne told him she wanted someone else to run, and that she had a vision for Sudbury that didn't include him as the Liberal candidate.

Olivier is quadriplegic and records important conversations in lieu of taking notes, but while he recorded both Sorbara and Lougheed — posting the audio to YouTube — he has said technical difficulties prevented him from recording his chat with Wynne.

Lougheed, a local Liberal figure who was on the police services board and runs a funeral home, spoke to him first.

"So I come to you on behalf of the premier and on behalf of, I guess, Thibeault more indirectly, to ask you if you would consider stepping down — more than that Andrew, nominating him," Lougheed said.

"In the course of that deliberation the premier wants to talk to you. They would like to present to you options in terms of appointments, jobs, whatever, that you and her and Pat Sorbara can talk about."

Wynne later spoke with him, then Sorbara called.

"So Andrew let me ask you this, I mean, of course you recognize the position that we're going to find ourselves in here, right, where she's going to have to make a decision around the appointment, right, versus, allowing this to go ahead," Sorbara said.

"We should have the broader discussion about what is it that you'd be most interested in doing and then decide what shape that could take that would fulfil that, is what I'm getting at, whether it's a full-time or part-time job at a constituency office, whether it is appointments to boards or commissions, whether it is also going on the (party executive)."

The Ontario Provincial Police investigated the allegations both criminally and under the Election Act. Sorbara was cleared criminally, but Lougheed was charged with one count of counselling an offence not committed and one count of unlawfully influencing or negotiating appointments. Those charges were stayed.

When the Election Act charges were laid in November, Sorbara had recently taken a leave of absence as the premier's deputy chief of staff to become the Ontario Liberal Party CEO and 2018 campaign director. She stepped down after being charged.

The bribery section of the Election Act says no person shall directly or indirectly "give, procure or promise or agree to procure an office or employment to induce a person to become a candidate, refrain from becoming a candidate or withdraw his or her candidacy."

The trial is scheduled over 21 days in September and October.