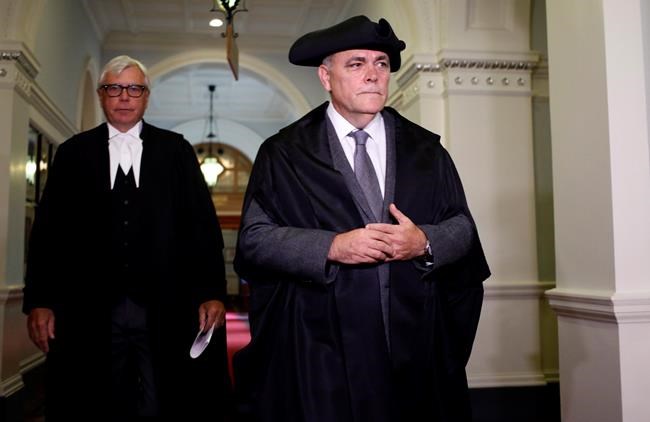 VICTORIA — British Columbia's minority New Democrat government released an ambitious list of affordability-focused pledges in its throne speech Friday, and the possibility of delivering those promises grew stronger when a Liberal member "betrayed" his party to become the Speaker.

The surprise acclamation of Darryl Plecas as Speaker added more breathing room to the razor-thin NDP minority government led by Premier John Horgan, who has an agreement with the Green party to combine votes for a one-seat majority in the 87-seat legislature.

"Certainly, it does give us more flexibility. I'm not going to deny that," Horgan said, referring to the Liberal Speaker.

"I'm excited about the next number of years," he said.

Plecas's acclamation ends months of speculation on how Horgan would manage a government with such a narrow minority had he followed protocol and offered up a New Democrat member as Speaker.

Interim Liberal Leader Rich Coleman said he was disappointed with Plecas. He accused him of betrayal, saying the Abbotsford South Liberal assured him he was not interested in the Speaker's job.

"Basically, when you tell your colleagues you are not going to do something, they take you at your word," he said. "You break your word. You go do it and become the Speaker. You have de facto already went and joined the NDP."

Green leader Andrew Weaver said the Liberals reacted poorly to Plecas's decision when they should have congratulated him on stepping forward.

"I thought the Liberals did themselves a lot of damage in the public eye today based on their almost, 'pick up my baseball bat and go home kind of approach,' " he said.

No party was able to win a majority following the May 9 provincial election, which gave the Liberals 43 seats, the New Democrats 41 and the Greens three.

The NDP and Greens used their voting agreement to oust the Liberals last June in a non-confidence vote.

The pressure on the NDP minority eased when former Liberal premier Christy Clark resigned last month, leaving her seat open until filled in a byelection. Plecas's move into the Speaker's chair has given the government even more room because he has been effectively removed from the Liberal voting pool.

Coleman said Plecas technically remains a member of the Liberal party for now, but he will not be attending caucus meetings.

The throne speech, read by Lt.-Gov. Judith Guichon, said British Columbians can expect reforms to provincial campaign finance laws that "eliminate corporate and union donations, put strict limits on individual contributions and make sure that only people living in B.C. can donate to our political parties."

It said the government will set the terms for an electoral reform referendum and change the current fixed election date from the spring to the fall every four years starting in 2021.

The speech highlighted affordability for British Columbians, mentioning a $100 monthly increase to income assistance and disability rates and the removal of tolls on the Port Mann and Golden Ears bridges.

Protection from hefty increases for renters and annual bus passes to people with disabilities as of next January were part of the list of promises.

"I heard very little today about how we're going to do that," he said.

The speech cited homelessness and noted the devastation from the worst wildfire season in the province's history.

"The circumstances that bring a person to homelessness can be as arbitrary and unexpected as a wildfire but it is no less devastating. Those without homes need and deserve our help," Guichon read from the speech.

The speech said the government will take on the issue of overdoses that killed 876 people between January and July, many of them as they were alone because they weren't aware of the risks of fentanyl-laced substances or couldn't get treatment.

It highlighted education as a high priority and said next week's update to the budget will restore funding for classrooms, a key plank for the New Democrats after the Liberals stripped cash and provisions from teachers' contracts, leading to a Supreme Court of Canada ruling that called for reinstatement of funding.