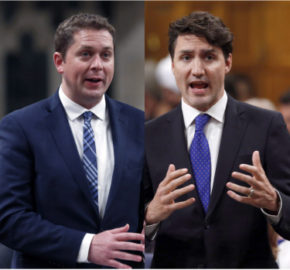 Ballot – The latest Nanos federal ballot tracking has the Liberals at 34.6 per cent support, followed by the Conservatives at 31.3 per cent, the NDP at 16.3 percent, the BQ at 7.2 per cent and the Greens at 7.3 per cent.

Preferred Prime Minister – Nanos tracking has Trudeau as the preferred choice as PM at 41.9 per cent of Canadians followed by Scheer (22.5%), Mulcair/Singh (8.7%) and May (5.3%). Twenty per cent of Canadians were unsure who they preferred. (Note: this was the second week that Jagmeet Singh, the newly elected leader of the NDP was included in the tracking).

Nanos Party Power Index – The Nanos Index which is a composite of a series of measures including ballot and leadership impressions has the Liberals with 57.3 points, the Conservatives 48.5 points, the NDP 43.8 points, the Greens 33.5 points and the BQ 28.2 points (QC only).