Bill Morneau to talk to ethics watchdog about his personal fortune 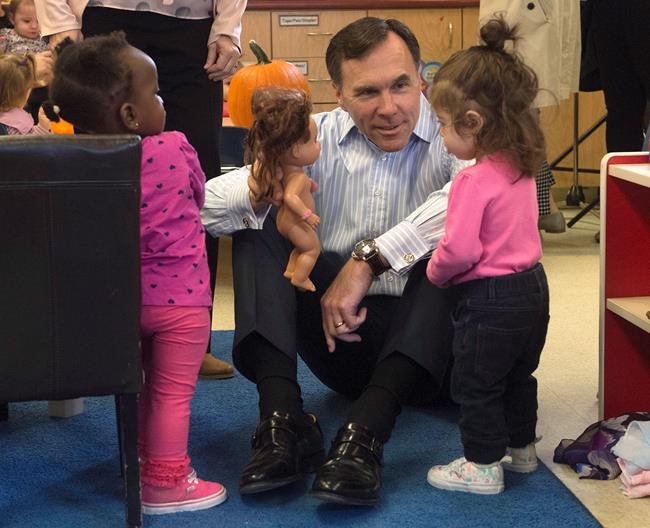 OTTAWA — Finance Minister Bill Morneau said he will go out of his way to reassure Canadians his personal fortune will not get in the way of his job, but his political rivals are not about to let things go that easily.

"The rules work, but what we will consider in my situation is how the population can be absolutely certain there will be no possibility of a conflict," Morneau said Wednesday as he appeared at an Ottawa centre for adolescent mothers and their children to promote his fall fiscal update.

"That's why I will do more than the recommendations," Morneau said. "That's why I will work with the ethics commissioner to make sure that the situation that I have had over the past two years, without a conflict, will continue with the confidence of Canadians."

The finance minister said he is sitting down with the federal ethics watchdog on Thursday to discuss how he can go above and beyond what has already been done to make sure that he does not come into any conflict of interest.

Morneau said ethics commissioner Mary Dawson gave him good advice when she recommended putting up a conflict-of-interest screen to prevent his family business, Morneau Shepell, from coming into conflict with his duties as finance minister after the Liberals won the 2015 election.

She did not recommend putting his assets into a blind trust, since his shares in the pension firm were held indirectly through private companies.

Morneau promised last week to sell at least $21 million worth of stock and place his other assets in a blind trust.

That did little to quiet the controversy and on Wednesday, Morneau suggested his desire to shift the attention to the good economic news and spending contained in the fall economic statement is one of the reasons he wanted to meet Dawson.

But his political rivals, who had been hammering Morneau over his initial proposals for small business tax reform for weeks before the storm over his personal assets hit the news, made it clear that was not going to happen any time soon.

The Conservatives asked about Morneau and his personal wealth 18 times during Wednesday's question period in the House of Commons.

"We don't care what he had for breakfast or what kind of socks he wears," he said. "We do care about the fact that he controls $330 billion of other people's money."

The New Democrats also joined the fray, with Nathan Cullen, the ethics critic for his party, accusing the Liberals of trying to change the channel with the fall economic statement, which projected smaller-than-expected deficits and nearly $15 billion in fresh spending over five years.

Prime Minister Justin Trudeau, who typically fields all questions in the House of Commons on Wednesdays, accused the opposition parties of doing some deflecting of their own.

"I understand why the opposition has nothing more to do than sling mud today, because the economic news in this country is better than it has been in a long time," said Trudeau.

At the news conference, Morneau was asked whether the renewed focus on the fact that he is a millionaire is damaging his credibility as someone who wants to improve the lives of middle-class Canadians.

Morneau said it was what he experienced during his time in the private sector that "propelled" him into political life.