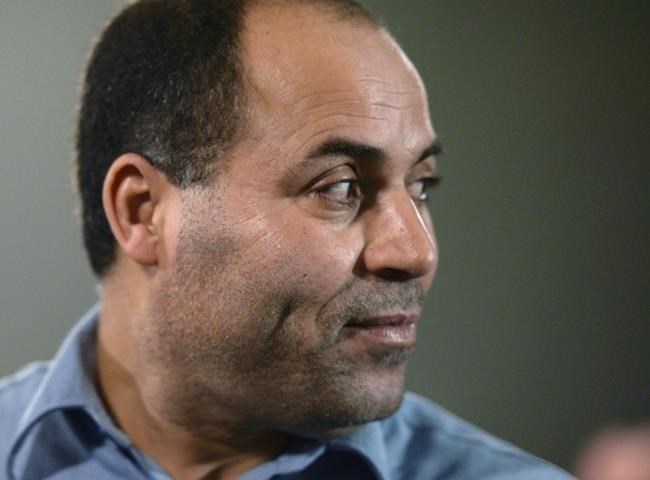 OTTAWA — The wife of terror suspect Mohamed Harkat told a court Thursday her husband wouldn't hurt a bug — literally — as she argued for fewer federal restrictions on his everyday activities.

Authorities are balking at Harkat's request for more leeway to use the internet outside the family home and travel freely within Canada, saying he continues to pose a threat almost 15 years after being arrested.

Sophie Harkat testified at a Federal Court of Canada hearing on the application that her spouse recently fished a millipede from the sink with a glass and placed it outside rather than squash it.

"He just doesn't have it in him," she said under questioning from Barb Jackman, her husband's lawyer.

The two-day hearing will determine whether current restrictions on the refugee from Algeria will be eased.

Harkat, 49, was taken into custody in Ottawa in December 2002 on suspicion of being an al-Qaida sleeper agent.

The federal government is trying to deport the former pizza-delivery man using a national security certificate — a legal tool for removing non-citizens suspected of ties to extremism or espionage. Harkat denies any involvement with terrorism and fears torture if returned to his homeland.

Following his arrest, Harkat was locked up for more than three years. He was released in June 2006 under stringent conditions that have since been loosened somewhat.

Harkat now lives at home with Sophie. He has access to a computer connected to the internet at their residence. He has to report in person to the Canada Border Services Agency every two weeks. And, though Harkat can travel within Canada, he must provide the border agency with five days' notice of his plans as well as a full itinerary when leaving the national capital region. He also has to report to the border agency by phone once a day while travelling.

Harkat's submission to the court argues he "presents no threat to Canada or to any person" and that he has diligently complied with requirements. "A continuation of these conditions is not justified."

The couple says the restrictions now in place have caused great stress and hardship, even preventing them from having children.

Harkat works part-time as a custodian at a church. But Sophie told the court Thursday the limitations on computer use have denied her husband opportunities to be a retail cashier or parcel courier.

Harkat wants permission to have a laptop computer and tablet with internet connectivity for use outside the home, including for work purposes. He wishes to report to the border agency monthly by phone, through voice verification. And he wants restrictions on his travel lifted, with the exception that he remain in Canada.

Authorities are willing to allow Harkat to travel anywhere in Ontario or Quebec for up to 24 hours without notifying the border agency, and agree to him reporting in person once a month.

But they oppose the idea of Harkat having general internet access outside the home, saying it would undermine their ability to keep tabs on his communications. They say requests to use communications technology for employment purposes should be dealt with on a case-by-case basis.

Harkat told of being frequently monitored by border services agency officers, who tailed him during a summer visit to a lakeside cottage.

Michel Renaud, a senior border agency official, said it is important to ensure Harkat abides by requirements, even on family outings.

"I'm pretty sure it's not fun for them," Renaud told the court, but he quickly added, "We have a job to do."

In a submission to the court, the ministers of public safety and immigration say an October 2016 assessment by the border agency concluded that any risks are neutralized by Harkat's compliance with the existing terms and conditions.

"The fact that there is no new information linking Mr. Harkat to threat-related information activities does not warrant the variations he is requesting," the federal submission says. "The ministers have not changed their position that Mr. Harkat remains a threat."

Federal Court Justice Simon Noel ruled in 2010 that there were grounds to believe Harkat is a security threat who maintained ties to Osama bin Laden's terror network after coming to Canada.

Civil libertarians have long criticized the security certificate process as fundamentally unjust because the detainee sees only a summary of the accusations, making them difficult to challenge.

In a 2014 ruling, the Supreme Court of Canada said the security certificate regime does not violate the person's right to know and contest the allegations they face.

The Supreme Court also concluded Harkat "benefited from a fair process" when Noel reviewed his case.

Harkat's file continues to grind along.

A delegate of the immigration minister will determine whether Harkat poses a danger to national security and, if so, whether the risk to Harkat of deporting him outweighs the danger or severity of the acts he allegedly committed.