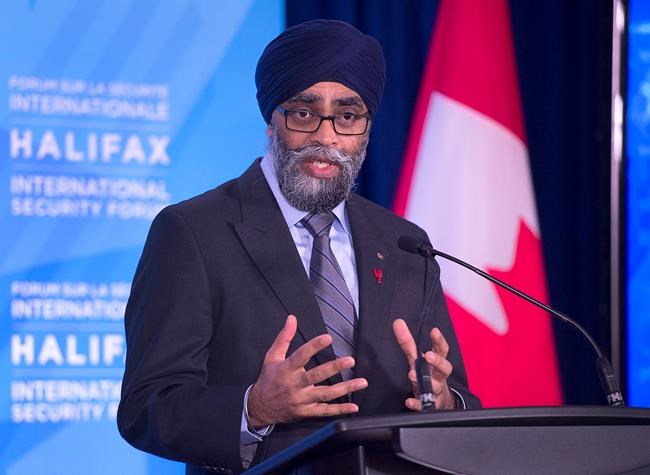 Sajjan told the Halifax International Security Forum on Friday that Canada has shown initiative in a host of international conflicts, while maintaining its multilateral approach to foreign policy.

"For Canada, the development of this policy served as a tangible example of how the sharing of ideas and perspectives can translate into policy that responds to the challenges of our modern world," Sajjan said. "We recognize that these engagements is vital not only to our own domestic security, but to global security."

Sajjan trumpeted several Canadian peacekeeping commitments unveiled during this week's United Nations peacekeeping summit in Vancouver. They included offering soldiers, equipment and a feminist perspective on peace missions. The federal government has also promised to increase military spending by $62 billion over the next two decades.

Stoltenberg told the conference that Trump has changed his tune since the campaign. Stoltenberg said he does not have any doubts about the American commitment to the alliance.

He said both Canada and the US have increased their military presence in Europe recently, showing that NATO remains strong.

"Actions speak louder than words," Stoltenberg said. "Having Canada and United States back in Europe is not a sign of fracturing. It's not a sign of weakness. It's a sign of strength and a strong transatlantic bond."

Stoltenberg praised Canada for sending hundreds of soldiers to Latvia to lead a NATO battle group there.

Sajjan cited Canada's "unwavering" commitment to Ukraine as further evidence of its emerging leadership role, as well as its recent efforts to help contain the Islamic State group in Iraq.

Sajjan told reporters that Canada will deal with threats posed by the Islamic State, whether they come from afar or closer to home.

He said the military and other security agencies are taking measures to ensure that Canadians who fight with the Islamic State pose no threat if they return to Canada, while abiding by international law.

He said returnees are being monitored to ensure they are not a threat.

"We will make sure that we put every type of resource into place so that Canadians are well protected," Sajjan said as the three-day conference began Friday. "Our main priority is making sure that they don't become a threat to Canada."

Representatives from more than 70 countries are attending the three-day forum in Halifax, which bills itself as an annual gathering of democratic leaders committed to global security and prosperity.

Topics on the agenda include the role of women in peacemaking, Russian relations, nuclear weapons and climate change.