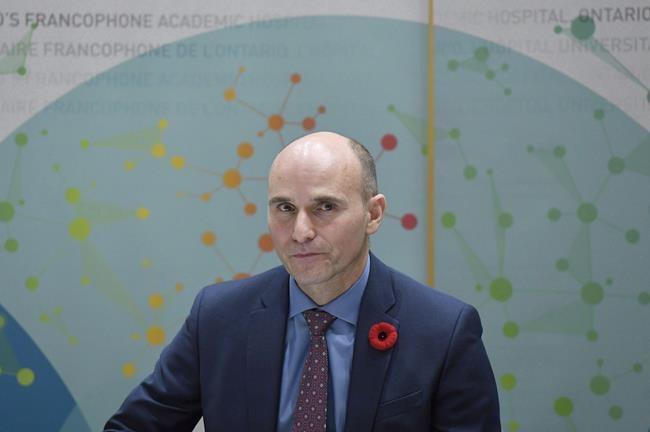 OTTAWA — A Liberal government fond of promising help for those working hard to join the middle class unveiled billions in housing help Wednesday that could make a difference to hundreds of thousands of households — but only in a few years when federal money finally flows to new units and tenant benefits.

The release of the national housing strategy on National Housing Day was designed to tout tens of billions in planned and expected spending over the next decade and solidify the federal government's re-entry into the affordable housing sector.

Included in the plan was a promise to introduce legislation to make housing a fundamental right, create a new, portable housing benefit for low-income households, and prioritize funding for the most vulnerable populations like women fleeing domestic violence.

But the plan itself rests heavily on provinces and territories kicking in matching funds, without which federal dollars won't flow.

Even then, it won't happen until April 2018 and not until 2021 in the case of the new housing benefit.

Prime Minister Justin Trudeau said the reason much of the money won't be spent until after the next election in 2019 is because the federal government needs to take the time to get the details right and satisfy myriad local, provincial and territorial needs.

"We are looking at the realistic horizon that is going to not just put a Band-Aid on the problem, but create the kind of deep change and lasting impact that we know Canadians are going to need," he said at an event in Toronto.

"When we say the federal government is back for the long term, we mean it — and that starts with getting it right from the very beginning."

NDP Leader Jagmeet Singh called the plan "timid" because of the delays in spending when the money is desperately needed now.

And Conservative Leader Andrew Scheer said the strategy does nothing for lowering the high cost of housing ownership in major urban centres, only making a passing reference to exploring further options.

What the plan does is pull together almost $10 billion in planned spending, $11.2 billion in housing money outlined in this year's budget, and $4.8 billion the Liberals promised to keep spending on funding to affordable housing providers. The rest is all from provinces, territories and the private sector to total about $40 billion over a decade.

There are also strict strings attached.

A new housing fund to create 60,000 new affordable housing units and allow repairs to 240,000 more, through grants and loans, will prioritize mixed-income developments and require about one-third of all those units to be offered at 80 per cent of median market rents for a 20-year period. (A mix of other funding is poised to create an additional 40,000 new affordable housing units.)

The $4-billion portable housing benefit could eventually help 300,000 households by 2028 and provide on average $2,500 a year in help, but only if provinces and territories match $2 billion in federal money and ensure the extra money doesn't cause a jump in private rents. Mitigating inflationary pressures account for why the documents speaks of targeting the money to those in community and social housing.

The strategy also says the government plans to create a federal housing advocate and table legislation to enshrine housing as a human right, requiring regular reports to Parliament on federal efforts to ease the housing burden for hundreds of thousands of families.

The details of that idea and others in the strategy still need to be worked out, prompting municipal and housing groups to lend cautiously enthusiastic support for the plan.

Recently released census data found that 1.7 million households were in "core housing need" in 2016, meaning they spent more than one-third of their before-tax income on housing that may be substandard or does not meet their needs.

The government hopes the strategy will lift 530,000 of those families out of that core housing need category, help 385,000 more avoid losing their homes and lift 50,000 out of homelessness.

Wednesday's news included precious little help for Indigenous communities, which is getting a separate plan that Trudeau said the government is still finalizing. Separate plans are in the works for First Nations, Inuit and Metis.