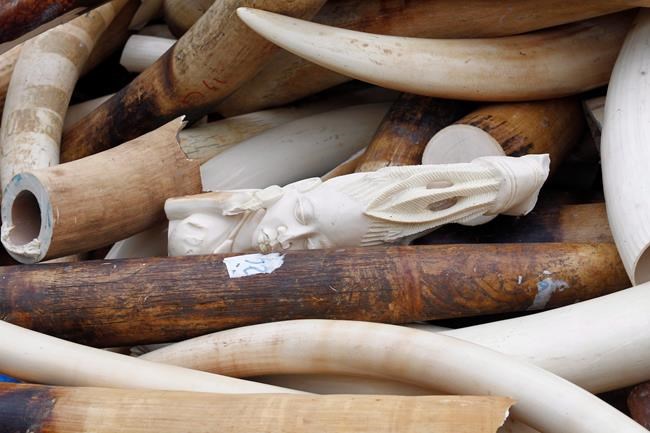 OTTAWA — In the last decade, Canadians have legally imported more than 2,600 trophy animals that are on an international list of endangered species.

The imports also include thousands of animal skins, skulls, feet, ears, tusks, horns and tails of everything from antelope to zebras from all corners of the earth.

Earlier this month, the United States made waves when the Fish and Wildlife Service suddenly reversed a 2014 ban on elephant imports from Zimbabwe and Zambia.

U.S. President Donald Trump stepped in to halt that reversal, tweeting earlier this month that he considers elephant hunting a "horror show" and that it was unlikely anyone could convince him hunting the animals was good for conservation.

Canada, on the other hand, never banned the imports in the first place.

The Convention on the International Trade in Endangered Species, or CITES, tracks animals on three lists based on the level of protection needed and requires permits to be issued before these animals or any parts of them can be traded across international borders.

Another 280 mammals were imported intact after having been stuffed, including antelope, oryx, monkeys and lions. Canadians also imported 434 skulls and 260 feet from elephants, zebras, hippos and rhinos; 87 elephant ears; 1,156 elephant tusks; and 17 rhinoceros horns.

Those do not include animals brought back as trophies that are not considered endangered, which do not require any kind of special permit.

Elephants are among the most endangered species in the world, with a 2016 census finding populations down 30 per cent between 2007 and 2014. Elephants are on the most-endangered list of CITES in all countries except four: Botswana, South Africa, Zambia and Zimbabwe.

Populations in Zambia and South Africa are stable, but elephant populations in Botswana and Zimbabwe have dropped 15 and six per cent, respectively, since 2010.

Sixty-one of the elephant trophies imported into Canada between 2007 and 2014 came from those four countries. Fifteen elephants came from the most endangered list.

When it comes to allowing the importation of trophies, any decisions that are made have to be based on sound science, not on feelings, said Jason St. Michael, operations manager for Safari Club International in Canada.

"I think people need to really take the time to educate themselves about the values of big game hunting," he said.

In some countries, elephant hunting should be banned, but in places like South Africa — where elephant populations are being well managed — it is both an economic driver and a conservation program to allow regulated hunting.

Elephanatics, a Vancouver-based elephant conservation group, is petitioning the Canadian government to support moving all elephants onto the so-called Appendix I list, including those from Zimbabwe, Zambia, Botswana and South Africa.

Canada was one of a number of countries that voted against such a move last year.

Environment Canada would not make an official available for an interview, but said in an emailed statement that Canada voted against moving all elephants to Appendix I because the four countries affected "did not meet the CITES criteria for listing on Appendix I."

"Canada adheres to a strict set of principles in the CITES fora and believes decisions regarding trade controls should be founded on best available science, support sustainable use of well-managed populations, and the conservation needs of species," it reads.

Fran Duthie, president of Elephanatics, said Canada also needs to ban the domestic trade in ivory. Canada is one of just four countries that refuses to do so, joining Japan, Namibia and South Africa. In Canada, the ivory trade includes Inuit hunters who trade in ivory from narwhals and walruses.

Elephanatics, however, says as long as any trading of ivory is allowed, illegally obtained ivory from poachers who slaughter elephants — even in highly endangered populations — can slip into the system without much trouble.