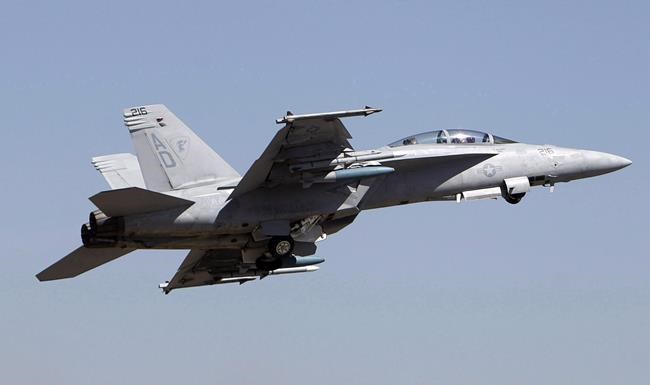 OTTAWA — Boeing has weighed in on the Trudeau government's plan to buy second-hand fighter jets from Australia, saying it respects the decision but has no intention of abandoning its trade dispute with Canadian rival Bombardier.

The U.S. aerospace giant was primed to sell 18 of its Super Hornet fighters at an estimated cost of $6 billion to temporarily augment Canada's fleet of aging CF-18s until they can be replaced.

But the Liberals are scrapping that plan over Boeing's fight with Bombardier and will announce next week its plan to buy used F-18s from Australia — despite having previously expressed reservations about buying old jets.

Boeing, noticeably silent in recent weeks as talk of the Australian fighters heated up in Ottawa, finally broke its silence Friday in a carefully worded statement.

Citing media reports that the government would choose the used jets, Boeing said it "respects the Canadian government's decision" and will continue to look for ways to work with Canada.

"Although we will not have the opportunity to grow our supply base, industrial partnerships and jobs in Canada the way we would if Canada purchased new Super Hornets," the company said, "we will continue to look to find productive ways to work together in the future."

But Boeing also made clear that it had no intention of dropping its dispute with Montreal-based Bombardier, which it accuses of having broken trade rules when it sold dozens of C-Series passenger planes to a U.S. airline.

"Our commitment to creating a level playing field in aerospace remains," Boeing said. "We will continue to support all efforts to build an environment of free and fair competition marked by compliance with agreed-upon rules."

The Liberals said in November 2016 that they would buy 18 "interim" Super Hornets to fill a critical shortage of fighter jets until a full competition to replace the entire CF-18 fleet could be held.

The government said at the time that the Super Hornet was the only aircraft able to meet its immediate needs and Defence Minister Harjit Sajjan rejected suggestions Canada buy second-hand aircraft instead.

"Yes, there were options for buying old ones," Sajjan told the House of Commons on May 29. "No, we do not want to buy used equipment; we want to invest in new planes."

But that was before Boeing complained to the U.S. Commerce Department that Bombardier had sold its C-Series jet liners to Delta Airlines at an "absurdly" low price with assistance from federal government subsidies.

Commerce officials have proposed a 300 per cent duty on all C-Series planes imported into the U.S., though the penalties won't be official pending a separate ruling on whether Bombardier hurt Boeing's business.

European aerospace giant Airbus has since proposed to buy a majority stake in Bombardier's C-Series commercial planes, in the hopes that it can skirt any duties by building C-Series planes for U.S. customers at its plant in Alabama.

Note to readers: This is a corrected story. An earlier version said Airbus was based in Paris.