Provinces, feds to square off over tax proceeds of legalized marijuana 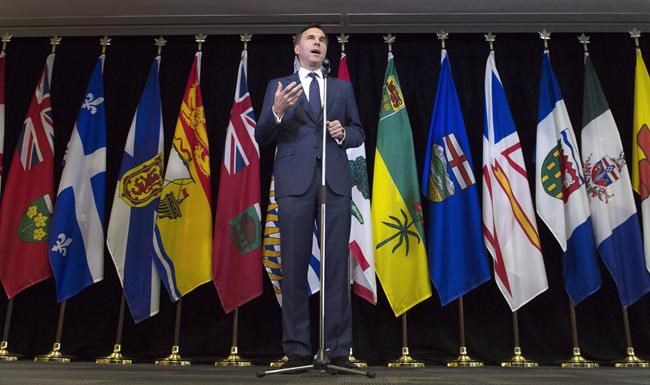 OTTAWA — A cross-country squabble over how best to divvy up the proceeds of Canada's coming legal-weed windfall is about to intensify as finance ministers gather for high-stakes talks in Ottawa.

For the provinces and territories, a key question looms: what entitles Ottawa to claim so much as half of the tax revenues that will start flowing when marijuana is legalized next summer?

The provincial and territorial governments insist they should get the lion's share of the funds because they'll shoulder most — if not all — of the costs associated with legalization.

But federal Finance Minister Bill Morneau will counter with an argument during the meetings that Ottawa has already made big financial  commitments towards pot legalization, said a senior government official.

Morneau will explain that he's already earmarked more than $1 billion toward legalization over the next five years, with a focus on areas such as public safety, policing and awareness, said the official, who spoke on condition of anonymity because they were not authorized to speak publicly.

Nearly $700 million of that commitment was outlined in Morneau's recent fall economic update.

"We've identified significant funds that we are going to put forward in that regard," Morneau said on Sunday as he headed to a working dinner with his provincial and territorial counterparts.

"We need to cover our costs — they're legitimate."

At the same time, Morneau added that it's important to consider how municipalities and provinces will cover the costs required.

Negotiations will be centred on the federal Liberal government's proposal to impose a cannabis excise tax of $1 per gram or 10 per cent of the final retail price, whichever is higher.

It's expected to bring in as much as $1 billion per year. Ottawa has long insisted its legalization plans were never about the money, but about keeping pot away from kids.

An initial federal offer of a 50-50 split with the provinces was met with equal parts disdain and incredulity.

The federal government has since said it's prepared to go further — as long as some of that extra cash goes to cities. The Federation of Canadian Municipalities wants a third of the revenues earmarked to help municipal governments handle administrative and policing costs.

Morneau reiterated Sunday that he "can be flexible," but he refused to say how much he's willing to accept.

For ministers like B.C.'s Carole James, it's unclear why Ottawa should keep any of it.

"Before we even get to talking about sharing, we want to hear about what responsibilities the federal government's taking on to justify taking any of the percentage," James said in an interview.

"Certainly, from our perspective the formula put out by the federal government is a no-go. That's very clear."

"I want to know what the feds are going to put in — what they're going to pay for," Sousa said in an interview.

"I want us to have unity around Canada on this issue and I definitely want to see more because we're bearing more of the costs."

The added expenses likely to land with the provinces are expected to include public-awareness campaigns, beefed-up policing, busier court systems and increased road safety efforts.

"If the responsibility resides with the provinces, then the resources must flow to the provinces," Manitoba Finance Minister Cameron Friesen said in an interview.

"Any departure from that theme, then, must come with concessions from the federal government."

There's no guarantee that revenues will be higher than the associated costs, said Friesen — particularly considering Ottawa's rushed timeline to legalize cannabis by July.

The federal government might face some "very small" fixed costs such as those related to its administrative role for taxation, he added, but that "pales in comparison" to the size of the responsibility and the added risks that will be assumed by the provinces.

Ottawa has also committed $274 million to support policing and border efforts related to legalization, and some of the money is to go to the provinces.

But it remains to be seen if more federal commitments are on the way.

Regardless of how it's divvied up, the excise tax is expected to generate big bucks — as much as $1 billion per year, by one estimate from Liberal MP Bill Blair, a former Toronto police chief and the Trudeau government's point man on legalizing cannabis.

Federal and provincial sales taxes would be applied on top of the excise tax, but governments are aiming to ensure the total cost stays reasonable so as to keep black marketeers at bay.

Also on the table Sunday and Monday will be the three-year review of the Canada Pension Plan and the federal government's proposed tweaks to the formula behind equalization payments.

Equalization is designed to help poorer provincial governments provide public services that are reasonably comparable to those in other provinces.

At $11.7 billion, Quebec will once again receive by far the biggest payment from Ottawa. It will be an increase of nearly $700 million compared to this year.

Ontario, which has seen its economy improve in recent years, will receive $960 million next year — down nearly $500 million from this year.

The "have" provinces, which won't receive any funds through the program, will once again be B.C., Alberta, Saskatchewan and Newfoundland and Labrador.

The formula is also based on a three-year moving average of economic growth, so a province's have- or have-not status can lag economy-altering events.