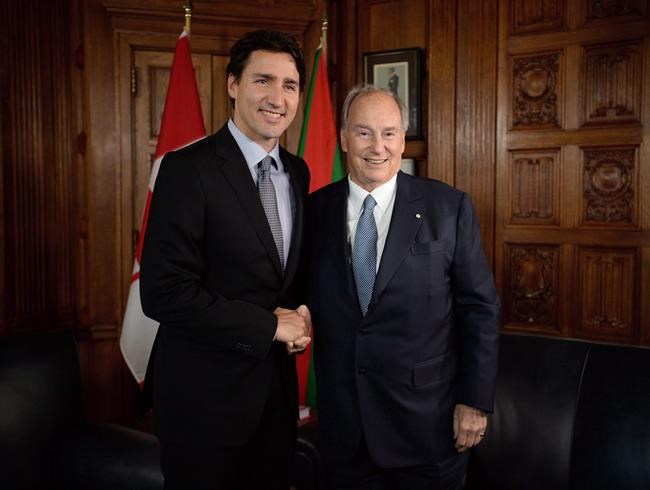 OTTAWA — Justin Trudeau, who came into office vowing to set the gold standard for transparency and ethical behaviour, became Wednesday the first prime minister found to have violated federal conflict of interest rules.

Federal ethics commissioner Mary Dawson concluded Trudeau violated the rules when he vacationed last Christmas at the private Bahamian island owned by the Aga Khan and when his wife and children vacationed on the same island months earlier in March 2016.

Dawson found the Trudeaus' visit to the island — and the prime minister hopping aboard the Aga Khan's private helicopter to get there — broke sections of the Conflict of Interest Act that prohibits a minister or any member of their family from accepting gifts or “advantages” that could reasonably be seen as influencing government decisions.

Moreover, she found Trudeau didn't properly recuse himself on two occasions in May 2016 from private meetings about the Aga Khan and a $15-million grant to the billionaire philanthropist's endowment fund of the Global Centre for Pluralism.

The outgoing ethics commissioner's long-awaited report suggested Trudeau could have avoided this outcome had he come to her before going on the trip that began on Dec. 26, 2016. She concluded he failed to follow his own ethics rules for cabinet ministers and that he should have recognized that going on the trip would be seen as a real or apparent conflict of interest.

Trudeau publicly apologized Wednesday for not asking Dawson for her clearance — something Dawson hinted in her report that she may have given. He said he didn't believe the vacation would be an ethical concern because he'd been told — he didn't specify by whom — there was no issue since the Aga Khan, the spiritual leader of the world's Ismaili Muslims, is a friend.

During a hastily-called news conference, Trudeau took responsibility for the ethical lapse and said, in future, he'll ask the ethics commissioner in advance to clear all his personal vacations.

The public shaming will be the biggest penalty Trudeau faces for violating the rules.

The Conflict of Interest Act empowers the commissioner to impose only fines on those who fail to meet reporting requirements and Dawson's office confirmed Wednesday that those penalties don't apply in this case.

NDP Leader Jagmeet Singh said he wants the ethics commissioner to be empowered to apply sanctions or reprimands in cases like this one.

"Right now, the ethics commissioner does not have the power to do anything. There's actually no consequences to this finding. That to me is extremely unacceptable," Singh said in Toronto

Before that, the two hadn't spoken for 30 years.

A year after becoming Liberal leader, the Aga Khan sent a standing invitation for Trudeau and his family to visit Bells Cay, suggesting it would provide Trudeau with some private family vacation time. It was Trudeau's wife, Sophie Gregoire Trudeau, who contacted the Aga Khan's daughter about vacationing on the island in March 2016 and then over Christmas last year.

In both cases, the Trudeaus were told the Aga Khan and his family may not be present, which led Dawson to remark: "These circumstances do not suggest that Mr. Trudeau and the Aga Khan were seeking to fulfil opportunities to spend private time together as friends."

While he said he fully accepts Dawson's report, Trudeau continued to insist that the Aga Khan, an honorary pall bearer at his father's funeral,  is "someone who has been a long-time friend of my family's, a friend of mine, a friend to Canada as well."

But Dawson said she found it unlikely Trudeau would have been offered use of the island had he not been a "significant player on the Canadian political scene" and had Aga Khan not had official dealings with the government.

Still, she found no evidence that Trudeau took part in any decisions on federal funding to the Aga Khan's organizations, nor gave them any preferential treatment.

Conservative Leader Andrew Scheer said it wasn't enough for the prime minister to comply with the law — he must go above and beyond the law, neither of which Trudeau did.

"It is a serious lapse in judgement for the prime minister not to realize that there was a conflict in the first place," Scheer said.

"I accept him at his word today, but it does seem like this prime minister made the decision (that) it was easier to ask forgiveness than to ask for permission."

The Trudeau family was accompanied on last December's vacation by Liberal MP Seamus O'Regan and his husband, and Liberal party president Anna Gainey and her husband, Tom Pitfield. They all flew on the Aga Khan's private helicopter, which is the main link between the Bells Cay and Nassau.