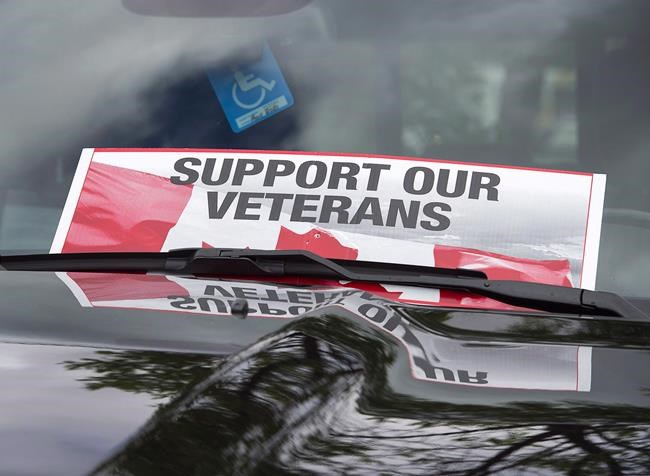 OTTAWA — The Trudeau government's long-awaited plan to provide lifelong disability pensions to veterans has been met with confusion and frustration from many of those that it is expected to help.

Veterans Affairs Minister Seamus O'Regan unveiled the new pension plan on Wednesday, more than two years after the Liberals promised it during the last federal election — and only days before Christmas.

The plan promises more money to injured veterans than the current suite of benefits, especially the most severely disabled who can't work and continue to suffer from service-related injuries.

Yet it offers only modest increases to those on the other end of the spectrum, and continues to provide many with less than the previous lifelong disability pensions, which were abolished in 2006.

"We were focused in this program on those who are catastrophically injured," O'Regan explained during a news conference at National Defence Headquarters.

The plan is expected to cost $3.6 billion over six years, and will take effect in April 2019.

Veterans and support groups were scrambling after the announcement to figure out exactly how the changes would affect them and their clients, citing a lack of detail as a major complaint.

"It's confusing," said Jim Lowther, president of VETS Canada, which support homeless veterans in different cities across the country. "We've been going over this all morning, but it's very vague."

Veterans receive financial benefits and compensation based on the extent of their injuries or disabilities and whether those factors have an impact on their post-military career and earnings.

The existing system, created in 2006, provides a lump-sum worth up to $360,000 for the most severely disabled, in addition to rehabilitation, career training and income support.

While veterans who want the money right away will still be able to choose the lump-sum payment, the Liberals are also giving them the choice of a monthly payment instead worth up to $1,150.

Those with severe or permanent disabilities will also be eligible for an additional new benefit worth between $500 and $1,500 per month. Both benefits are tax free.

Officials said the more than 61,000 veterans who have already received a lump-sum award will be assessed to determine how much they would have received per month. They will also be eligible for the new benefit, which officials said will be retroactive and could result in substantial one-time payments.

The government will also lump together six different benefits for veterans who can't find work or whose post-military careers pay less than when they were serving in uniform.

Yet it wasn't immediately clear who will be eligible for different elements of the new pension plan, or even which of the income-replacement programs will remain in existence after they are merged.

O'Regan guaranteed no disabled veteran will end up with less money, and the department plans to launch an advertising campaign to educate former service members about the plan.

"All of those covered under the (existing) New Veterans Charter will be automatically assessed against the new pension-for-life program," O'Regan said.

"And no individual will be subject to a net-decrease in overall benefit."

But that didn't stop many on social media from questioning whether they would see any real benefits, or prevent concerns about existing supports being clawed back.

"They've created chaos with a vague presentation," said Aaron Bedard, one of six disabled Afghan veterans who launched a legal challenge against the federal government in an unsuccessful bid to force a return to the previous pension system.

"It's like watching Game of Thrones: You get a couple of answers, but you end up with a dozen new questions."

The Liberals' new plan was also panned for continuing to offer less financial support for the majority of veterans than the lifelong pension system that existed prior to 2006 — the same criticism that bedevilled the previous Conservative government after it introduced the New Veterans Charter.

"So we still have this ludicrous situation where you can have two guys with the same injuries from the same war but at different times and getting different compensation," said Mark Campbell, who lost both legs in Afghanistan.

"That's fundamentally wrong, and it has not been addressed."

The Conservatives and NDP were also critical that the new pensions won't come into effect until April 2019, which O'Regan said was necessary to pass required legislation and ensure Veterans Affairs staff are ready for the change.