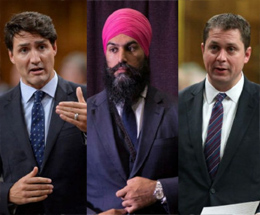 Ballot – The latest Nanos federal ballot tracking has the Liberals at 42.8 per cent support, followed by the Conservatives at 29.1 per cent, the NDP at 20.0 percent, the BQ at 3.3 per cent and the Greens at 4.2 per cent.

Nanos Party Power Index – The Nanos Index which is a composite of a series of measures including ballot and leadership impressions has the Liberals with 63.0 points, the Conservatives 49.5 points, the NDP 46.2 points, the Greens 35.1 points and the BQ 25.6 points (QC only).

The full Nanos Research report can be found here…