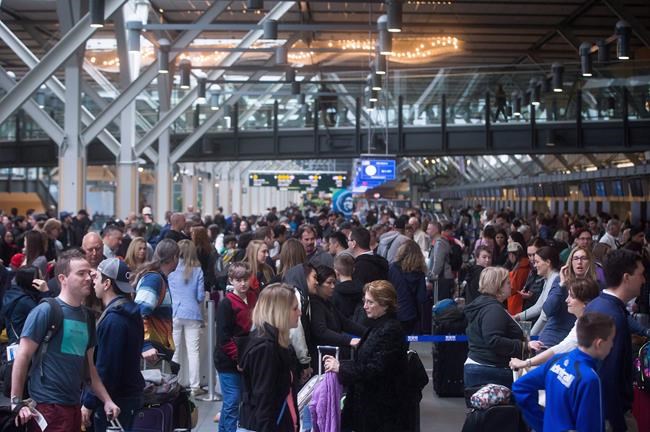 As the Senate considers Bill C-49, which sets the framework for passenger protections, conspicuously absent is a commitment to protect travellers from growing wait times at airport security screening.  As the number of passengers waiting more than 15 minutes has been steadily climbing, Canada’s aviation and tourism sectors worry about next year.

Unfortunately, ATSC funds don’t automatically go to CATSA.  Like federal income tax, they go into general revenues where they are allocated to projects, without a specific tie back to CATSA.

CATSA’s multi-year budget, set in 2010, has no variability for the 38% increase in volume since.  As a result, CATSA has sought additional money each year in order to reach its target of screening 85% of passengers in under 15 minutes.  Travellers were fortunate last year CATSA received $29 million more, but only $25.3 million was provided this year, despite traveller volumes increasing six per cent.

At a recent parliamentary committee hearing, there was an exchange between an MP and CATSA executives on how CATSA could continue to deliver the same level of service for $3 million less.  While it has no control over budget allocations, CATSA’s response is maddening nonetheless;  it is delivering the same service level, within a 3 per cent margin of error.

Passengers in the growing security line-ups likely disagree. Parliamentarians on the House Finance Committee do as well; for Budget 2018, they recommend fully allocating ATSC revenue to airport screening.

With deteriorating service, Toronto Pearson and Vancouver International have had to spend an additional $14 million just to reach the 85% in 15 minutes target, leaving 10 million passengers waiting up to an hour.  If government under investment continues, other airports may have to follow suit.

CATSA’s projected funding shortfall for next year is $180 million. There must be a better way to fund a service so critical to ensuring safe, efficient skies.  CATSA requires government support to establish a better funding mechanism, tied to growth. This is just common sense.

Transport Minister Garneau acknowledged this challenge last year when he committed to improving wait times to global standards, but while government is looking at long-term solutions, there is urgent concern for next year.  With the government‘s passenger rights legislation under final scrutiny in the Senate, underfunding of airport security screening is even more striking as this is one of the biggest traveller complaints and a cause of flight delays

“Minister Garneau’s Transportation 2030 is a great first step that commits to improve security screening and make CATSA nimbler to growing demand for air travel,” Toronto Region Board of Trade President and CEO Jan De Silva told delegates at a recent conference.  “But we need to see these measures through, with service standards and a funding model put into place that allows resources to grow with demand.”

De Silva is Chair of the Canadian Global Cities Council (CGCC), which includes eight of Canada’s largest business communities. They advocate for federal investments and policies that support the competitive development of Canada’s major urban centres.

Every one per cent increase in international flight yields thousands of the jobs in the community and a similar increase in trade value.

“These may seem like odd issues for the business community to concern itself with, but keeping people and goods moving through our airports is essential to business and trade flow,” says De Silva.

We hope government heeds CGCC’s message as it prepares next year’s budget.