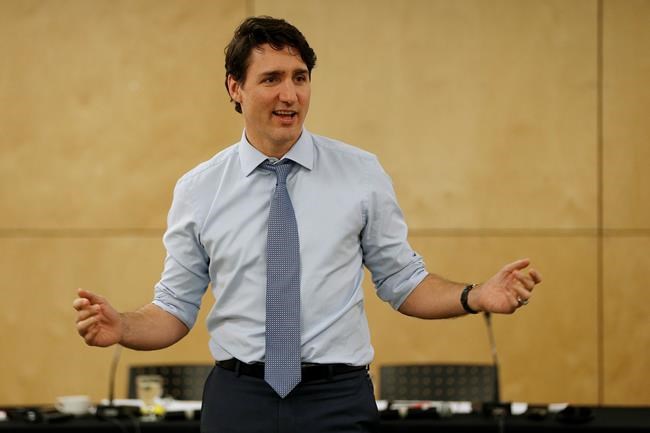 WINNIPEG — Prime Minister Justin Trudeau faced questions on immigration, pipelines and Indigenous issues  — and dealt with a few disruptions — during a town hall meeting with some 1,800 people at the University of Manitoba Wednesday night.

Trudeau was asked by some people whether he would boost the number of immigrants accepted into Canada every year.

Some people had personal questions, such as one woman who said a Nigerian friend was facing deportation and faced great danger if she returned to the African nation because she is a lesbian.

One questioner asked Trudeau whether he was concerned about the number of people crossing the border illegally and claiming refugee status.

Trudeau responded that Canada has obligations under international treaties to give asylum seekers a hearing, but also has the resources to ensure that people who are deemed not to be refugees are dealt with appropriately.

"We always make sure that security is the first thing that is checked," Trudeau said.

One woman interrupted another questioner by shouting out opposition to the Kinder Morgan pipeline expansion project that would carry diluted bitumen from Alberta through British Columbia.

She swore at the prime minister and security before leaving.

Another man asked Trudeau to respect the British Columbia government’s plans to ban increased shipments of diluted bitumen off its coast until it can determine that shippers are prepared and able to properly clean up a spill. The move would limit expansion of the Kinder Morgan Trans Mountain oil pipeline.

He then shouted that Trudeau wasn't providing a direct answer.

The crowd applauded loudly and drowned out the woman when Trudeau said groups that specifically hire students to oppose abortion rights should not be federally funded.

"There are certain groups that are specifically dedicated to fighting abortion rights for women and inclusion of LGBT communities. And that is wrong," he said.

"That is not certainly not something the federal government should be funding summer students to do — to roll back the clock on women's rights. That's not going to happen."

The meeting, which lasted more than 90 minutes, also saw Trudeau questioned on the troubled inquiry into missing and murdered Indigenous women.

He was asked what he would consider a successful outcome.

"Ideally, it will provide closure and healing for the families, a measure of justice for victims, and most importantly, show us how to put an end to this ongoing national tragedy."

Trudeau is to hold town halls in Edmonton on Thursday and in Nanaimo, B.C., on Friday.

Note to readers: This is a corrected story to clarify concerns raised about pipeline.