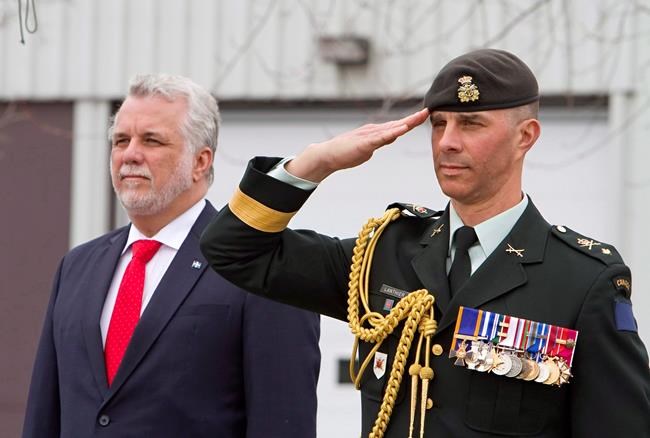 The study, published by the Canadian Global Affairs Institute this week, says the government is on track to spend billions less on new equipment this year than was promised in the Liberals' policy.

The main reason, says the report's author, defence analyst David Perry, isn't that the money isn't available; bottle necks in the procurement system have slowed progress on a variety of projects, meaning the money can't be spent.

That has been a recurring theme in military procurement for the past five years, as the actual amount of money spent on new equipment has steadily declined because of delays and other snarls in the system.

And while the Liberals' defence policy, released last June, promised to dramatically increase year-over-year spending on new equipment over the next decade, it did not include any major new measures to address those problems.

The short-term fear is that the military will have to wait longer than expected for new equipment; the bigger concern is that the Liberal government's ambitious plan to revitalize and expand the military won't materialize as promised.

The first year of the 20-year defence policy, entitled "Strong, Secure, Engaged," was supposed to see federal officials buy about $6-billion worth of new equipment for the Canadian Forces.

Perry, however, found that barring a major surprise in the last quarter of the federal government's fiscal year, officials will purchase between $3 billion and $4 billion in equipment.

"The first fiscal year of Strong, Secure, Engaged is already providing evidence that the policy's spending plans will not be achieved as outlined unless significant changes (to the procurement system) are made," he wrote.

The policy did include some planned reforms to the system, which has been the subject of years of criticism and controversy for failing to deliver much-needed equipment on time and on budget.

And while some federal procurement officials have already acknowledged the challenge they face, they insist that efforts are underway to streamline the system and hire more specialized staff.

"Financially, we've been very well resourced through the defence policy, and now we have to deliver on it," Maj.-Gen. Jean-Marc Lanthier, who is responsible for managing National Defence's corporate strategy, said in October.

"The money is coming and our feet are being held to the fire to do what we said we could do."

But many experts and industry representatives worry those reforms will have only a limited effect, an assessment that Perry echoes, saying that a "paradigm shift" will be required to make sure the policy doesn't go off the rails.

That's because the policy includes a plan to quadruple spending on new military equipment over the next seven years — an astronomical increase unparalleled in recent Canadian history.

"While the procurement changes outlined in Strong, Secure, Engaged are all sensible and likely to have some positive impact on procurement," Perry wrote, "they are unlikely to support the paradigm change required."

Perry points to the way the defence policy was crafted as one of the main culprits for the current situation, noting that it was drafted in secret by a small group of defence officials without input from other departments.

"This limited ability to realistically validate the hundreds of individual project schedules and their spending forecasts that comprise the capital spending plans of Strong, Secure, Engaged," he wrote.

"This is important because a project's schedule dictates when DND will actually spend money. If schedules slip, funds are not spent as intended — a dynamic that has occurred repeatedly over the last 10 years."