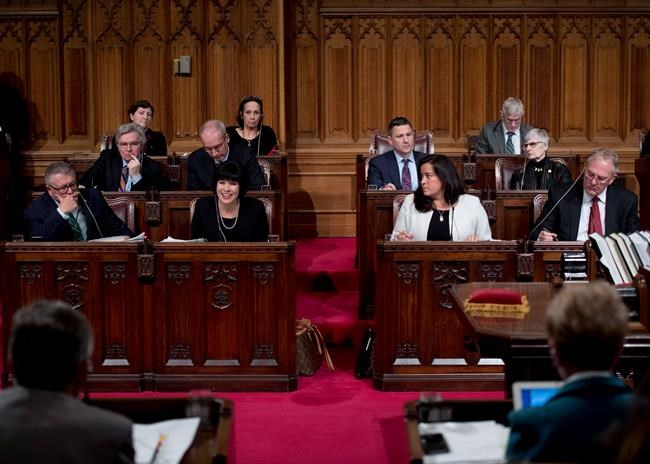 OTTAWA — The Trudeau government insists it's on track to legalize recreational pot in July — but whether that means it will actually be on sale by then is uncertain.

Health Minister Ginette Petitpas Taylor told senators Tuesday that provinces and territories have indicated once Bill C-45, the legislation setting up a legal cannabis regime, is given royal assent, they'll need another eight to 12 weeks to prepare for retail sales.

"Once we've reached royal assent, there's going to be a transition period because we have to ensure that provinces and territories have the capacity to get the product into their shops," she said later outside the Senate.

However, she did not clarify when asked whether she means the goal is to have royal assent by then or to have cannabis actually on sale by then.

If the latter, that would mean the Senate would have to pass the bill by no later than the end of May — which seems unlikely given the depth and breadth of concern among senators about C-45 that was apparent during a rare two-hour grilling of Petitpas Taylor and two other cabinet ministers in the Senate chamber Tuesday.

One senator, independent Liberal Jim Munson, attempted to get some clarity, asking if the ministers were saying the actual sale of marijuana will not occur until eight to 12 weeks after July 1.

Public Safety Minister Ralph Goodale's response only further muddied the water: "Our goal is this summer in an orderly fashion with all the pieces sequenced in the right order so that they are effective."

Conservative senators, in particular, are not keen on legalization but their Senate leader, Larry Smith, said Tuesday they won't be obstructionist.

"I promise you, however, that we will give a voice to those in the Canadian public who have significant and valid concerns about the policy choice your government is making," he said.

Smith argued that the government is proceeding too quickly and should not legalize marijuana before conducting an intensive public education campaign about the dangers of cannabis use on the developing brains of youths.

Denise Batters, another Conservative senator, questioned the government's argument that regulating cannabis will make it harder for young people to get access to it, pointing out that C-45 allows individuals to grow up to four plants in their homes.

Other senators raised concerns that legalization will encourage young people to smoke and increase the incidence of impaired driving.

But it wasn't just Conservative senators who raised concerns.

Sen. Serge Joyal, an independent Liberal, questioned the government's contention that legalization will push organized crime out of the marijuana marketing business. He pointed to a report that found almost half of 86 companies that have received Health Canada permits to grow marijuana are financed through offshore tax havens frequently used by organized crime to launder money.

Screening of such companies is insufficient to ensure "we're not doing through the back door what we are trying to eliminate from the front door," Joyal said.

Petitpas and Goodale — along with Justice Minister Jody Wilson-Raybould and Toronto Liberal MP Bill Blair, the government's point man on marijuana — repeatedly countered that most of the potential problems identified by senators already exist in Canada, where prohibition has led to cannabis use by young people that is the highest among developed countries and a market controlled entirely by criminals.

"I'm frankly not prepared to leave the health and safety of our children in the hands of criminals," added Blair, a former Toronto police chief.