Loonie down amid market turmoil, but experts say not much further to fall 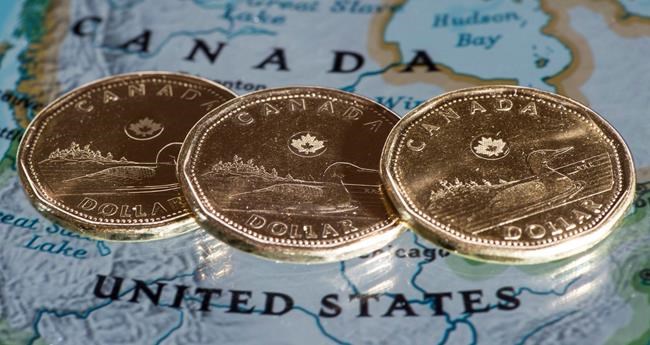 TORONTO — The plunge in global stock markets over the past week has dragged down the Canadian dollar and oil prices, but some market observers see signs the loonie's fortunes will change this year even as the Canadian dollar continued its slide Monday.

The loonie is down slightly in the opening months of the year as the global stock market rout that started at the beginning of February has investors turn to safe-haven assets like the U.S. dollar and the Japanese yen.

The Canadian dollar tends to move on several types of data — particularly commodity prices — which have also seen their fortunes reverse during the heightened levels of volatility in the marketplace. When oil prices fall, the loonie typically follows suit, especially against the greenback as oil prices are denominated in U.S. dollars.

The C.D. Howe Institute says the Canadian economy is particularly open and, because of its reliance on commodity exports, vulnerable to shocks from abroad.

The Canadian dollar's response during recent tumult is consistent with past periods of volatility, said Mark McCormick, North American head of FX strategy for TD Securities.

He forecasts the loonie will bottom out at about 79 cents US and settle into a range of 80 to 81 cents US within the next couple of months.

"If we start to see equity markets selling off and volatility moving higher, the way that global capital flows move is there's usually repatriation of Japanese investors having overseas investments where they bring that money home, and U.S. investors also tend to bring their money home," he said.

The Canadian dollar is also influenced by the Bank of Canada. The currency soared last year after the central bank surprised the markets and raised interest rates twice in the third quarter. However, policymakers subsequently tempered their hawkish tone, emphasizing that the bank will proceed cautiously in order to gauge the impact of higher borrowing costs and a stronger loonie on the economy.

While a stronger currency may appeal to Canadian businesses buying goods and services from the U.S. and Canadians vacationing south of the border, a weaker loonie makes it easier for Canadian businesses to export products and bolsters our own tourism industry.

Sometimes larger macroeconomics trends can affect the loonie — an unanticipated rise in employment, for example — typically means a rise in the Canadian dollar.

The tumult that saw global equity markets begin to fall at the beginning of February was triggered by U.S. jobs data that showed wages grew more than anticipated, raising worries that signs of higher inflation might push the U.S. Federal Reserve to increase interest rates more quickly. Many market watchers had also been predicting a pullback after the market's relentless march higher over the past year.

"All of this has really triggered a spike in volatility because it's brought into question whether higher interest rates are going to curtail the global growth story or erode corporate profitability," said Candice Bangsund, a portfolio manager of global asset allocation at Fiera Capital in Montreal.

The VIX index — Wall Street's so-called "fear gauge" because it measures how much volatility investors expect in the future — had spiked above 50 early Tuesday, quadruple where it was about two weeks ago, before settling at 25 late Wednesday and them ramping up to 34 by late Thursday. By Monday morning it was hovering above 27.

Despite the nervousness in the market, Bangsund said her firm believes there is strong support for the Canadian dollar right now and has increased her 12-month target for the loonie to 85 cents US from 82 cents US.

"This is very positive for the Canadian dollar. Right now, we're just in a risk-off phase and what you're seeing is an over-reaction."