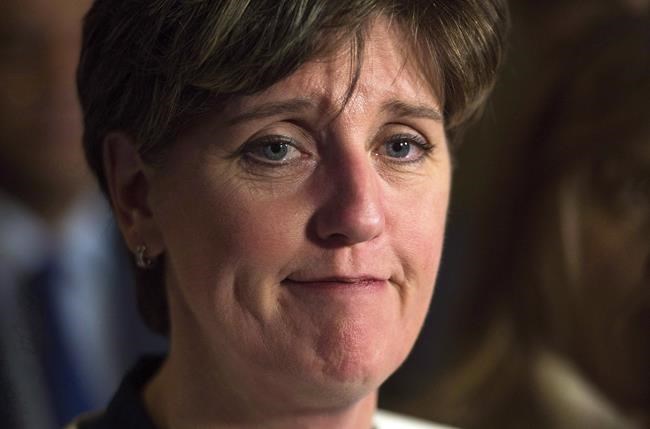 OTTAWA — International Development Minister Marie-Claude Bibeau says she wants to use the new $2 billion in extra aid dollars in the new budget to attract insurance and pension funds to invest in fight against global poverty.

She's targeting them for a simple reason: "They have a lot of money," Bibeau said Wednesday in an interview.

The new budget spending will be spread out of over five years and go towards a new International Assistance Innovation program, designed to come up with flexible new financing arrangements, and a Sovereign Loans program.

Bibeau said her priority is going after wealthy private-sector investors, because governments can't provide the level of spending needed to do development in a world where conflicts are lasting longer and displacing people for decades at a time.

The key to attracting those investors, she continued, will be in finding ways to reduce or manage the level of risk they would face by investing in conflict-ridden countries where extra aid dollars are sorely needed.

"They're willing to compromise a little if they can have an impact for the poorest and most vulnerable," she said. "But they don't want to take too much risk, so how can we be there to lower the risk and leverage money?"

The issue will be discussed at a meeting of G7 development and finance ministers in B.C. in May that will include her cabinet colleague Bill Morneau, she added — the last of a series of ministerials in the coming weeks that will set the stage for the annual leaders summit in June, being hosted this year in Quebec.

After his 2017 budget, Morneau told The Canadian Press aid agencies would have to be content with what they were already receiving. But on Wednesday, he said Canada wants to have an international impact with its G7 presidency.

"We said we need to step up as well with how we commit to the world," Morneau said. "We made a significant commitment to international development."

Bibeau said the road to getting a budget boost was to first consult with Canadians and then come up with a new policy, which was unveiled last June targeting women and girls. At the time, analysts said the new feminist foreign policy was credible but lacked new money.

Stuart Hickox, the Canada director of the anti-poverty advocacy organization ONE Campaign, said it was about time the government's "aspirational language" was backed by a strong financial investment.

"The budget also sends an encouraging message about how the prime minister intends to approach the upcoming G7 summit in Quebec."

With conflicts lasting longer and the laws of armed conflict being ignored by combatants, who try to kill civilians and aid workers, the need for stable, long-term planning in foreign aid has never been more crucial, said Bibeau.

The average length of time that a displaced person ends up spending in a refugee camp has ballooned to 17 years, she said.

"We have to think not only of providing food and immediate assistance, but we have to provide longer term health services, including sexual and reproductive health services."

The minister also defended the new spending and the impact it has on the government's bottom line. Foreign aid isn't about making Canadians feel good about themselves, it's about protecting their security, she said.

"When we have the new generation losing hope in their future, of not having the opportunity to study, to find a good job ... what do they do? They turn to armed groups, or they risk their lives trying to be a refugee," she said.