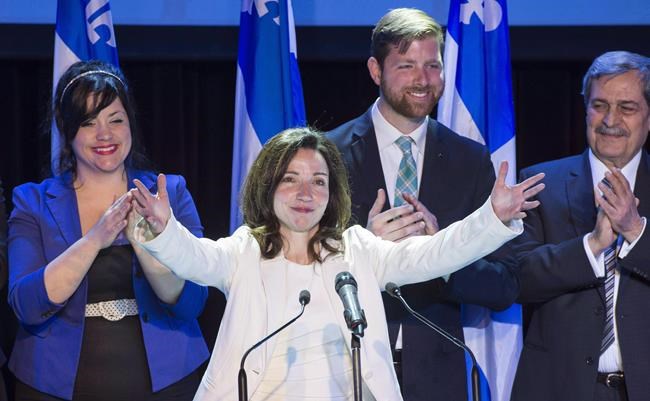 "I am staying on as leader," Ouellet said after news broke she was losing 70 per cent of her caucus, leaving the once-powerful party in complete disarray.

The seven, who will sit as Independents, made the announcement after a Bloc caucus meeting in Ottawa.

One of them is Louis Plamondon, who has been in the Commons since 1984, including the last 25 years as a Bloc MP.

He said he is "leaving the leader" but "is not leaving the Bloc Quebecois."

The exodus is a crushing blow to a party that formed the official Opposition under Lucien Bouchard in 1993.

Gilles Duceppe then took over the reins of the Bloc and led it in five consecutive elections in which it won at least half of the seats in Quebec.

Duceppe, in an interview with The Canadian Press, said Ouellet has to go.

"She can't stay," he said. "When 70 per cent of your caucus has no confidence in you, it's a major problem."

Ouellet, an engineer who worked at Quebec's hydro utility before entering politics, was first elected with the provincial Parti Quebecois in 2010.

She was re-elected twice and remains a member of the provincial legislature as an Independent.

Duceppe said Ouellet's style was never appreciated, be it within the Bloc, the PQ or the Quebec Natural Resources Department she headed between 2012 and 2014.

"Everywhere where she went it was like that," said Duceppe, adding he never worked with her directly.

"I haven't seen, among people I talk to, and I speak to people on the left and the right, I haven't seen anyone particularly happy with her leadership style."

Aside from Plamondon, the six others who left the caucus Wednesday are Luc Theriault, Gabriel Ste-Marie, Rheal Fortin, Michel Boudrias, Simon Marcil and Monique Pauze.

"We were faced with two options: either Madame Ouellet stepped down, or we walked," Theriault said.

Ouellet, who has been leader since last March, spoke to reporters later and said she addressed her personality during Wednesday's caucus meeting.

She admitted she could be more "task-oriented" as opposed to "people-oriented" and that that could sometimes irritate people.

Ouellet said she opened the door to what she called "mediation" but said she was rebuffed.

"Unfortunately, there wasn't really any discussion or questions," she said. "They left the room pretty quickly.

"The door is open (for the seven to return) and it will always be open. I am staying on as leader. I was elected by the members of the Bloc Quebecois and they're the people who gave me the mandate."

Ouellet had been often criticized for putting her personal drive for independence ahead of the day-to-day interests of Quebecers.

Xavier Barsalou-Duval, one of three Bloc MPs who chose to remain by her side, told reporters "today is not the end of the Bloc."

Duceppe said the party, despite its current problems, remains an important part of federal politics.

"The Bloc is absolutely still necessary," he said, likening it to the Scottish National Party, which promotes Scottish independence.

"There is an old lesson from the Americans," Duceppe continued. "No taxation without representation. All the different opinions in the country should be represented in the democratic assembly."

Maxime Bernier, a Conservative MP from Quebec, said the "Bloc Quebecois in Ottawa is in its final stages."

He invited the departing Bloc members to join his party.

"Right now, I think they're looking at the reality right now in Quebec," Bernier said. "And I think they think that the future is not so great for them. If they want to have a good future, they can come with us if they believe in a strong Quebec in a united Canada."