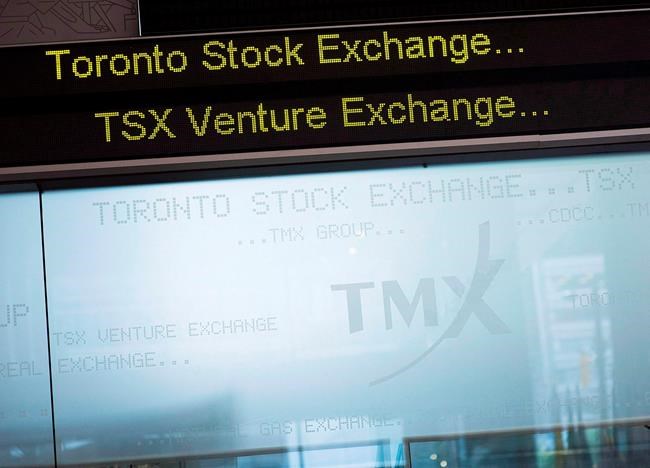 TORONTO — Stock on both sides of the border eked out minor gains Tuesday as investors continue to focus on a back-and-forth in Washington over tariffs the White House wants to impose on steel and aluminum imports.

The plans have faced opposition from other Republicans and business leaders who fear they could ignite a trade war and damage the global economy.

The S&P/TSX composite index was up 3.91 points to 15,545.19, with mining and materials companies offsetting drag from the energy and industrials sectors.

"I do think there is a calming of nerves on the trade risk front and I think that's helping the market be a little bit calmer today," said Colum McKinley, vice-president and portfolio manager of Canadian equities at CIBC Asset Management Inc.

"But I would caution that we fully expect volatility, especially on the trade front, to come back into the forefront of investors' minds, and that we are still deep in negotiations on NAFTA."

The TSX fell 1.8 per cent while U.S. stocks tumbled 3.7 during a three-day losing streak last week after President Donald Trump announced plans to impose a 25 tariff on steel imports and a 10 tariff on aluminum imports.

The president reaffirmed his plans during a news conference Tuesday afternoon, saying the U.S. has long been "mistreated" by trade deals and has been dealing with a massive trade deficit.

He reiterated that if he's able to make a deal with Canada and Mexico to improve the terms of the North American Free Trade Agreement, "there will be no reason to do tariffs" on steel and aluminum from the two .

In currency markets, the Canadian dollar closed at an average trading value of 77.53 cents US, up 0.47 of a U.S. cent.

- With files from The Associated Press.