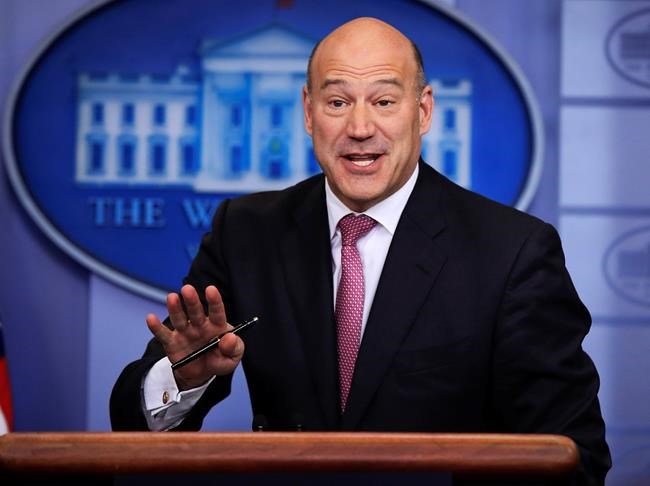 TORONTO — Falling commodity prices weighed on the Toronto stock index Wednesday as U.S. markets pared back earlier losses following a report that Canada and Mexico may get a special exemption from President Donald Trump's controversial tariffs.

Major Wall Street indexes had fallen sharply in late-morning trading following the departure of Gary Cohn, a top economic adviser in the White House who had been the leading internal opponent to the president's planned protectionist policies. These include proposed tariffs of 25 per cent on imported steel and 10 per cent on aluminum that could be passed as early as Thursday.

"As the president's economic adviser, Cohn was also responsible for a lot of what has happened in terms of tax reform and de-regulation," said Allan Small, a senior investment adviser at HollisWealth.

"When you have a guy like that who is respected by many in the business world, that was obviously the reason why the market took a nose dive in the morning."

But after a White House spokeswoman suggested Wednesday afternoon that the U.S.'s neighbours may receive a steel tariff exemption based on national-security considerations, U.S. stocks partially recovered to finish mixed. Investors have been hoping the White House won't follow through on the tariffs, which they fear could ignite a trade war and damage the global economy.

North of the border, the S&P/TSX composite index was down 72.58 points to 15,472.61 on Wednesday, with the energy and gold sectors among major decliners.

The April crude contract was down US$1.45 to US$61.15 per barrel after the U.S. Energy Department reported that American oil production rose last week — a move that thwarts ongoing efforts by OPEC and non-OPEC members to tighten global supplies and support prices.

In currency markets, the Canadian dollar closed at an average trading price of 77.24 cent US, down 0.29 of a U.S. cent following the Bank of Canada's morning decision to keep its key interest rate target on hold at 1.25 per cent.

Elsewhere in commodities, the April natural gas contract was up three cents at US$2.78 per mmBTU and the May copper contract was down two cents to US$3.14 a pound.