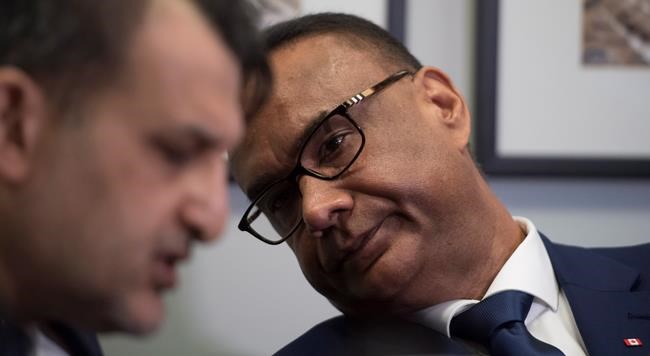 VANCOUVER — A man at the centre of a controversy surrounding Prime Minister Justin Trudeau's recent visit to India says he has renounced terrorism and no longer advocates for Sikh separatism.

Jaspal Atwal said Thursday that since he was convicted of trying to kill an Indian cabinet minister in 1986, he has tried to contribute to Canadian society and those efforts include meeting politicians from various parties.

Atwal, 62, said he was one of many Sikhs who got "caught up" in the separatism movement almost 40 years ago.

"While nothing can excuse my conduct, I can only say that during that time in the early 1980s I reacted to the Indian army storming the Golden Temple ... in a way that has caused much pain to many individuals," he told a news conference at his lawyer's office in Vancouver.

"I have nothing but regret and remorse for my actions."

Before he recently left for a trip to India, Atwal said he contacted Liberal MP Randeep Sarai to see if there was a chance for him to attend a reception with Trudeau.

Atwal went to the reception in Mumbai and was photographed with Trudeau's wife, causing a political and diplomatic uproar. An invitation Atwal received to another reception in New Delhi was rescinded as soon as news broke that he was on the guest list.

Atwal said he received an invitation from the Canadian ambassador after asking Sarai.

"When my attendance became the news story that brings us here today, I was completely shocked and devastated," he said. "When I asked to consider attending the reception, I had assumed there would be no problem. No one at any point indicated there would be any issue."

The fallout has been difficult for him and his family, said Atwal, who lives in Surrey, B.C.

"In the end, I am sorry for the embarrassment this matter has caused to Canada, India, my community and family and friends," he added.

"However, I want to again stress this, that terrible event that happened in the past is something I live with every day and something that I take complete responsibility for. I, like the Sikh community and Indians generally, have moved on from the issue that divided us almost 40 years ago."

In a previous interview with The Canadian Press, Atwal said he received an invitation directly from the Canadian ambassador's office.

He said he had a "good relationship" with Trudeau, who knows him by name. The pair sat together in Atwal's Hummer and chatted during one of Trudeau's visits to B.C. in 2008 or 2009, he said.

The Prime Minister's Office has said there is no merit to the assertions by Atwal.

During Trudeau's trip to India, the prime minister's national security adviser suggested in a background briefing arranged by the PMO that Atwal's presence was arranged by factions within the Indian government who want to prevent Prime Minister Narendra Modi from getting too cosy with a foreign government they believe is not committed to a united India.

An official spokesman for the Indian ministry has repudiated that theory.

Atwal's lawyer, Rishi Gill, said his client was never in contact with anyone from the Indian government to act on its behalf.

"He basically went to this occasion, put his name in, he assumes he was vetted appropriately, he has not hid who he was, he has not changed his name," he said. "If you Google Mr. Atwal you find information about him. It's not as if the fact the events that occurred, again, almost four decades ago were not in the news."

Sarai took responsibility for inviting Atwal and apologized, before resigning as chair of the party's B.C. caucus.

"The government of India, Randeep Sarai, and Jaspal Atwal, have all refuted Justin Trudeau's theory that Mr. Atwal was planted at the prime minister’s events in India, in an effort by the Indian government to humiliate Justin Trudeau," he said in a statement.

"By continuing to support a conspiracy theory that is unsupported by any proof and has been met only with denials by those alleged to be involved, Justin Trudeau is making unsubstantiated allegations to distract attention from his disastrous India trip."

Atwal, a one-time member of a Sikh separatist group that is banned in Canada and India as a terrorist organization, was convicted of attempting to kill Indian cabinet minister Malkiat Singh Sidhu on Vancouver Island in 1986.

He was also charged, but not convicted, in a 1985 attack on Ujjal Dosanjh, a staunch opponent of the Sikh separatist movement who later became B.C. premier and a federal Liberal cabinet minister.

Atwal said he has met and been photographed with New Democrats, Conservatives and Liberals, and has travelled to India without restriction.