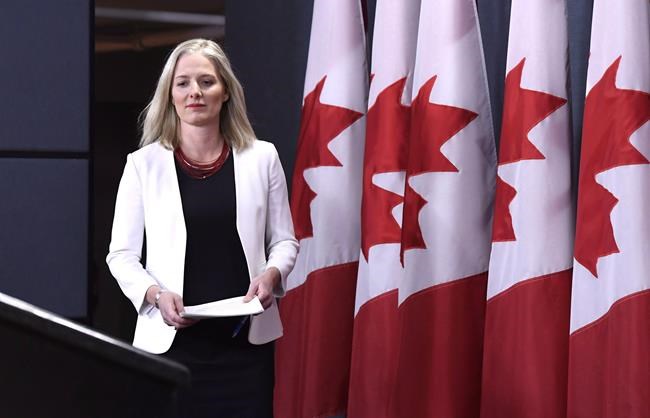 REGINA — Canada's environment minister says Saskatchewan will be subject to a federal carbon tax if it doesn't sign on to a national climate change plan by the fall.

Catherine McKenna says in a letter to her Saskatchewan counterpart, Dustin Duncan, that the province is best positioned to design a carbon-pricing approach that works for its situation.

"The other nine provinces have taken us up on that approach," she wrote. "It's unfortunate that your government has not yet chosen to do the same.

"I remain hopeful that you will change course ahead of the Sept. 1 deadline for all provinces and territories to submit their carbon-pricing plans."

Saskatchewan Premier Scott Moe says the province has not changed its mind about being the lone holdout on Ottawa's pan-Canadian climate-change framework.

"We stand in exactly the same situation for quite some time now," Moe said in Regina on Monday.

Moe met with Prime Minister Justin Trudeau on Friday and the two "agree to disagree" on the carbon tax, he said.

"We'll see where that goes."

McKenna said in her letter that Saskatchewan will be subject to a carbon tax, whether it signs on to the national plan or not.

The federal government would apply its carbon pricing in Saskatchewan and would ensure any revenues raised stayed in the province, she said.

Saskatchewan has already missed one deadline to sign on to the federal plan. McKenna has said that means the province won't get $62 million in funding for emissions-reduction programs.

Both Moe and Duncan have said they will still apply for the money from the low-carbon fund.

In her letter, McKenna said Saskatchewan's share now will be open to provinces, territories, municipalities, businesses, non-governmental organizations and Indigenous communities across Canada — including in Saskatchewan.

"Funding will be awarded to projects selected under a competitive process," she said. "I look forward to seeing excellent proposals come forward from your province."

"It's putting us at great risk of having a plan imposed on us designed in Ottawa, designed by Trudeau, rather than designed by the farmers, industry leaders and experts right here in Saskatchewan," Meili said.

— By Colette Derworiz in Edmonton. With files from Ryan McKenna in Regina