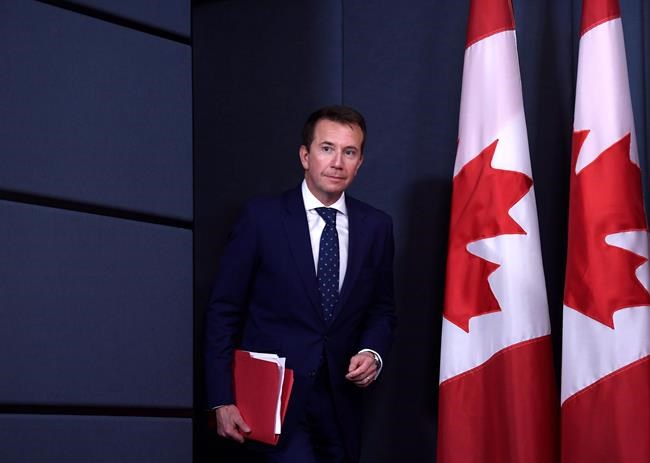 OTTAWA — The Trudeau government's efforts to streamline its budgeting process mean $7 billion in new spending commitments would be subject to far less parliamentary scrutiny — and the money could technically be spent elsewhere, says the federal spending watchdog.

Tuesday's report from the parliamentary budget officer focused on the government's proposed changes to better align Ottawa's budgetary spending plan with the main estimates document, one of the mechanisms that give departments and agencies the authority to spend public funds.

The concerns raised by Jean-Denis Frechette follow recent complaints from the Liberal government's political foes who say the adjustments have opened up a $7-billion "slush fund."

The Liberals are trying to meet their 2015 election promise to improve Parliament's financial processes by bringing more consistency and clarity to the government's accounting of how it spends public money.

But speeding up the implementation of budget measures will come at a cost, the report says, warning of incomplete information and weaker legal powers for parliamentarians who have better oversight of the money under the existing system.

"It will help the government in being able to fund its measures faster this way because they get the (spending) authority ahead of time — but it reduces the scrutiny and control of Parliament," deputy parliamentary budget officer Mostafa Askari said of the changes.

The government could follow the detailed spending table presented in its February budget, Askari noted. However, he said he saw nothing in the wording of the new law that would compel the government to spend according to its budget plan.

Conservative MP Pierre Poilievre has attacked the government over its legislation to streamline the accounting process, arguing it lacks legal enforceability on how Ottawa spends "this $7 billion no-strings-attached Liberal slush fund."

"Governments can only spend what Parliament has approved and only on the specific purposes approved, except this slush fund will allow the Liberals to move the money wherever they want," Poilievre said recently during question period.

"How is that accountable to taxpayers?"

Treasury Board President Scott Brison has rejected Poilievre's accusations, saying the measures are laid out in the budget, line by line and with detailed descriptions, on how the money will be spent.

A spokesman for Brison insisted Tuesday that, by law, the funds must be allocated to specific budget measures.

"Treasury Board will not have any discretion to use the funds for any other purpose, as this would be an unauthorized use of public funds," Farees Nathoo wrote in an email.

The Liberal government has already improved transparency and accountability by including an item-by-item table in the budget, he added.

"We are showing Parliament exactly where in the budget the funding for the new budget implementation vote comes from and how it will be used," Nathoo said.

"Parliamentarians can now literally follow the money from this new central vote to a specific line in the budget and the main estimates."

A departmental official, speaking on condition of anonymity because they were not authorized to discuss the matter publicly, strongly disputed the findings in Frechette's report, and insisted the government is enhancing control for parliamentarians.

The main estimates clearly tie the budget implementation vote to the items in the budget annex, which lists the commitments by department, measure and dollar amount, the official said, adding that any allocation beyond what's listed in the budget annex would not be permitted.

On Tuesday, a separate report by the C.D. Howe think tank graded the fiscal transparency and reliability of Canada's federal, provincial and territorial governments. The analysis gave Ottawa an "A-" compared to a grade of "A" last year and a "B+" in 2016.