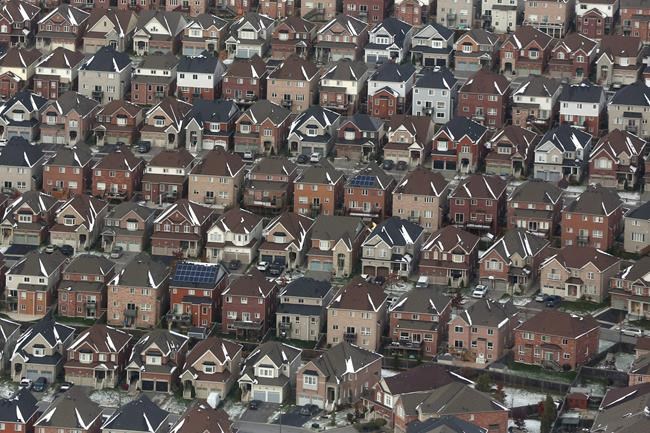 Sales also fell 2.9 per cent between March and April, bringing the total number of sales to 36,297.

Listings with CREA members fell by 4.8 per cent to 67,616 — a nine-year low for the month  — a sign that the flurry of activity that usually kicks off the spring real estate market didn't materialize in April. The large decline in new listings has also helped to keep 60 per cent of local markets in a balance between buyers and sellers.

The organization representing about 100,000 real estate agents across Canada blamed a new mortgage stress test that came into effect at the beginning of this year for the majority of the drop. It has long been critical of government intervention in the housing market at both the federal and provincial levels.

“This is exactly the type of collateral damage that CREA warned the government about. As provinces whose economic prospects have faced difficulties because they are closely tied to those of natural resources, it is puzzling that the government would describe the effect of its new policy as intended consequences.”

Policymakers at the Bank of Canada and the federal banking regulator have said the stress test is intended to reduce the risk of mortgage defaults if interest rates rise.

As of Jan. 1, the Office of the Superintendent of Financial Institutions requires buyers who don't need mortgage insurance to prove they can make payments at a qualifying rate of the greater of two percentage points higher than the contractual mortgage rate or the central bank's five-year benchmark rate.

The new policy reduces the maximum amount buyers will be able to borrow to buy a home. A similar test already existed for borrowers with insured mortgages. They were designed to insure people can still afford their homes if interest rates rise significantly.

The Bank of Canada has already hiked interest rates this year and economists expect it to do so again at least once or twice before the end of 2018.

Home sales activity was elevated at the end of 2017 as some homebuyers tried to lock in a mortgage before the new stress test took effect. April's sales decline continued a 2018 trend. Sales in the first three months slid to their lowest quarterly level since early 2014.

Economist Nathan Janzen of RBC Economics said the bank expects most of the impact of the new stress tests has been felt.

"The persistence of soft resale data also, though, adds to the evidence that the cooling impact on housing activity could be longer-lived than prior regulatory moves," Janzen added.

"Having said that, we don't expect the outsized declines in activity that were observed in the first quarter to be repeated in most places," Sondhi said.

"Ultimately, signs of stabilization should emerge later in the year and into 2019, amid healthy labour markets and ongoing population growth."

April sales were down in 60 per cent of all markets, which was "overwhelmingly" led by B.C.'s lower mainland and markets in and around Ontario's Greater Golden Horseshoe region, CREA said.

That number is well below the April averages for markets in B.C. and Ontario that overheated last year, causing both provinces to spring into action to cool the sector.

B.C.'s most recent budget introduced a speculation tax targeting both foreign and domestic buyers not paying tax in the province. Last April, the Ontario government aimed to quell its roaring markets with expanded rent controls, a plan to ensure property tax parity for new apartment buildings and legislation that would allow Toronto and other municipalities to implement a vacant homes tax.