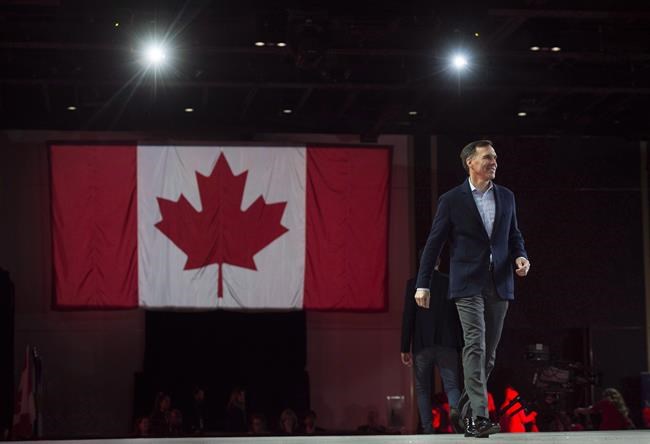 Ottawa is offering to stand behind any and all financial backers of the divisive Trans Mountain pipeline expansion as the Liberal government tries to shore up investor confidence in a country racked with uncertainty over trade and U.S. tax changes.

The government is providing "indemnity" to help ease the political risks for any investors, be they Kinder Morgan — the project's original architects — or otherwise, to ensure the controversial Alberta-B.C. project can proceed, said Finance Minister Bill Morneau.

And if Kinder Morgan were to abandon its plan to expand the existing pipeline, there are plenty of other investors out there willing to take up the cause, Morneau said — and they, too, will have the backing of the federal Liberal government.

"We believe it's in the best interests of Canada and Canadians to get this project built," Morneau told a news conference Wednesday across the street from Parliament Hill.

"It means thousands of good well-paying jobs for Canadians. It means greater investor confidence and a fair price for our natural resources. It's clear that we have the jurisdictional authority to ensure that it's completed.

Investors need certainty in order to back the project, Morneau said, but he steadfastly refused to disclose what sort of dollar figures are currently on the table.

The federal government greenlighted the expansion in 2016, but the company recently hit pause on all non-essential spending on the $7.4-billion project unless and until Ottawa could mitigate the ongoing concerns by Kinder Morgan's deadline of May 31.

The Trans Mountain debate is just one of many sources of uncertainty, particularly with the unknown economic impacts related to the renegotiation of the North American Free Trade Agreement and major U.S. tax changes that some warn could hurt Canadian competitiveness.

On Wednesday, Trudeau — travelling in the U.S. — promoted Canada as a country with investment opportunities and a business-friendly atmosphere during a New York City investors' meeting hosted by BlackRock Inc., the world's largest asset manager.

Morneau, meanwhile, will seek to reassure the wider investment community Thursday with a speech to the Toronto Region Board of Trade about Canada's economic plan and investor confidence.

His announcement Wednesday came same day as Kinder Morgan's Calgary-based Canadian operation held its annual meeting. The federal offer appeared to be an effort to ratchet up the pressure in advance of the company's approaching deadline.

"We remain steadfast in our previously stated principles: clarity on the path forward, particularly with respect to the ability to construct through British Columbia, and ensuring adequate protection of our KML shareholders," Kean said.

"While discussions are ongoing, we are not yet in alignment and will not negotiate in public."

Morneau's talks with Kinder Morgan had their genesis a month ago, when Prime Minister Justin Trudeau promised to deploy both financial and legislative tools to ensure the disputed expansion is able to proceed.

He instructed Morneau to sit down with Kinder Morgan to find a financial solution that would soothe their investors, and promised legislation reaffirming Ottawa's authority to press ahead.

Ottawa's position is that it approved the project after a rejigged environmental assessment and Indigenous consultation process, and in concert with the its climate change and oceans protection plan. Approval came in consultation with the previous B.C. Liberal government, which gave its consent to the project after its own conditions were met.

The election of NDP Premier John Horgan last year changed that. His minority government exists at the pleasure of the Green party, and on condition of his continued opposition to the project — or "unnecessary delays that are politically motivated," as Morneau put it.

"We see a path to an outcome that will assure that we can get the advantage that we're seeking; that's why those discussions are ongoing," he said.

"We do know that in order to make sure that we have that path, we need to deal with the extraordinary risks that have been presented by Premier Horgan."

In response Horgan said Wednesday that he's protecting B.C.'s interests by joining two legal cases that are already underway over the project. He's also asking the B.C. Court of Appeal whether the province has the right to protect its environment through a permitting system for hazardous substances that are transported inside its borders.

Federal NDP Leader Jagmeet Singh, who has made no secret of his party's opposition to the project, denounced the government plan to cut Kinder Morgan a "blank cheque" while saddling Canadian taxpayers with all the risk.

"Rigged process, First Nations & local communities shut out, oil spill threats, science ignored and now billions on the line," Singh tweeted. "It's clear this pipeline should not be built."

Alberta Premier Rachel Notley welcomed Ottawa's renewed commitment Wednesday, but said she has no plans to back off from legislation that could punish B.C. with oil-related price spikes.

Alberta has the right to act in its own best interests, particularly as B.C. continues to frustrate construction, said Notley, who warned she is "ready and prepared to turn off the taps" if the impasse continues.

The NDP premier also made her disdain for Singh's sentiments crystal clear.

"I think Jagmeet Singh is absolutely, fundamentally, incontrovertibly incorrect in every element of that tweet," she said.

"On this point I think we disagree quite fundamentally. I don't think the positions of Mr. Singh necessarily reflect the vast majority of opinions in the NDP across the country."

Brett House, Scotiabank's deputy chief economist, said Wednesday's news is likely part of a broader Ottawa effort to tell investors that Canada is "open for business" and that it's prepared to take the necessary steps to ensure they don't face unreasonable risk.

However, House stressed that Canada's investment numbers as well as investment intentions have remained strong despite some of the persistent economic uncertainty out there related to issues like NAFTA and the U.S. tax changes.

"There's clearly been some doubt raised by the pipeline discussion, but I think the announcement from the federal government goes some way to address that," he said.

Note to readers: This is a corrected story. The previous version suggested the Kinder Morgan annual meeting is tomorrow instead of today.