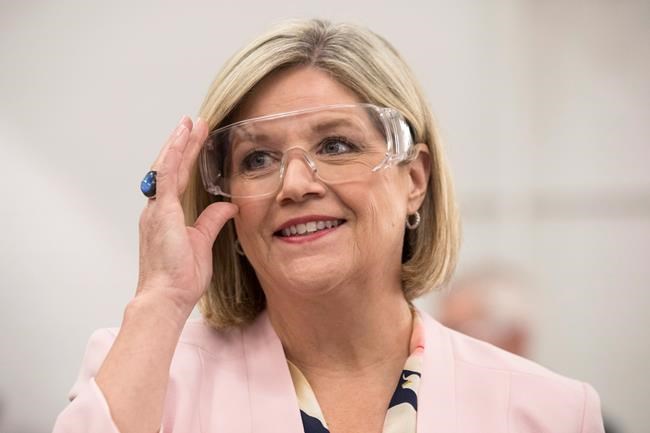 TORONTO — The New Democrats have the same 37 per cent voter support as the Progressive Conservatives even though most people believe the Tories will win the Ontario election come June 7, a new poll suggests.

According to the Leger poll being released Thursday, the struggling Liberals trail with 21 per cent support.

While a sizable number of voters — more than one third of those asked — have yet to make a final decision about where their X will go come voting day, the survey indicates Andrea Horwath and her New Democrats are far and away the favoured second choice of voters.

The poll finds that 63 per cent of Liberals would vote NDP as second choice, while 40 per cent of Tories now led by Doug Ford said the same.

"You can move from right to left as long as you avoid the Liberals," Bourque said in an interview. "What I'm seeing here is that if there is still movement between now and election day — or even over the last weekend — it should favour the NDP at this point in the game."

Horwath also leads handily in terms of who voters think would make the best premier. In all, 28 per cent of those asked named her, while 23 per cent — most men — said Ford. Wynne earned the nod from a mere 12 per cent. Horwath's approval rating crosses all age groups.

"That's not a whopping number," Bourque said. "If you look at the Liberals, only 39 per cent feel Kathleen Wynne has led the best campaign."

Bourque says the belief the Conservatives will win — 40 per cent indicated as much while just 13 per cent said the same for the other two parties — is likely a reflection of a narrative in place for month.

"That's what they've been told since the start of the campaign — that the Ontario PCs would win," Bourque said. "It's probably fuelled the NDP vote (and) it probably takes the Liberals out of the equation."

Despite Horwath's performance and her party's favoured second-choice status among supporters of the other two parties, Bourque said it is still too unpredictable to predict the New Democrats will end up in first place — at least in terms of the popular vote.

"It's all up for grabs," Bourque said.

The online Leger survey of 1,008 people eligible to vote in the Ontario election was done May 18 to May 22. The company says it used 2016 census data to weight the results by age, sex, mother tongue, region and education to ensure what it says is a representative sample of the population.

However, the polling industry's professional body, the Marketing Research and Intelligence Association, says online surveys cannot be assigned a margin of error as they are not a random sample and therefore are not necessarily representative of the whole population.

Note to readers: This is a corrected story. A previous version misspelled Horwath's first name