Canada hits back at ‘punitive’ U.S. tariffs in ‘turning point’ in relations 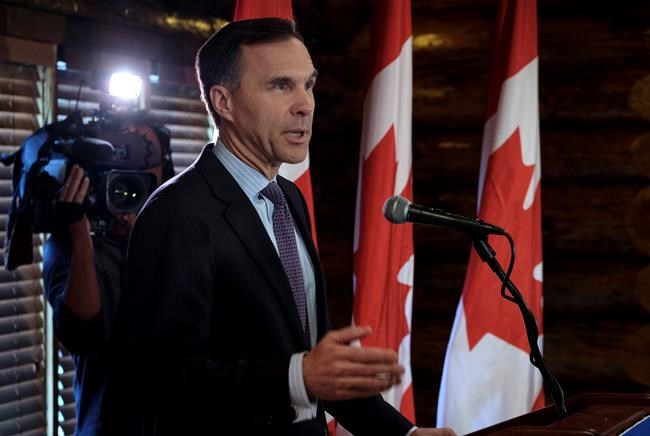 WASHINGTON — Justin Trudeau warned of a new turning point in Canada-U.S. relations while business leaders predicted dire economic consequences on both sides of the border Thursday as Donald Trump's administration made good on its threat to impose crippling new tariffs on steel and aluminum imports.

The decision, felt widely across North America and Europe, touched off a storm of criticism on both sides of the Atlantic.

In the U.S., House Speaker Paul Ryan, who is not seeking re-election, said he disagrees with the decision. One of several Republicans to voice opposition, Ryan said the administration should not be targeting "America's allies when we should be working with them to address the unfair trading practices of countries like China."

But the tariffs stung particularly in Canada, where Trudeau evoked the history of two countries fighting together from the beaches of Normandy to the mountains of Afghanistan.

In his direct conversations with the U.S. president, Trudeau said, he stressed the "interconnectedness of the Canadian and American economies" and the dire negative consequences both would likely face if the tariff threat went ahead.

"We talked about how difficult this was going to be in terms of a turning point in the Canada-U.S. relationship," Trudeau noted.

Canada responded by imposing dollar-for-dollar tariff "countermeasures" on up to $16.6 billion worth of U.S. imports in response to the American decision to make good on its threat of similar tariffs against Canadian-made steel and aluminum.

The tariffs, which apply to a long list of U.S. products that includes everything from flat-rolled steel to playing cards and felt-tipped pens, will go into effect July 1, said Foreign Affairs Minister Chrystia Freeland.

"This is the strongest trade action Canada has taken in the post-war era," Freeland said. "This is a very strong Canadian action in response to a very bad U.S. decision."

The U.S. measures, aimed at Canada, Mexico and the European Union, are illegal and counterproductive, said Freeland. Both she and Trudeau sounded incredulous that Canada could ever be considered a national-security threat to such a close and important ally.

"That Canada could be considered a national-security threat to the United States is inconceivable," said Trudeau, adding that the people of the U.S. are not Canada's target, and that the federal government would have far preferred that its hand wasn't forced.

Canada, Mexico and Europe had been exempted from import duties of 25 per cent on steel and 10 per cent on aluminum when they were first imposed in March, but those exemptions were to expire as scheduled on Friday.

A spokeswoman for the U.S. Chamber of Commerce told The Canadian Press that the decision will hurt American workers and families and will "will hike prices, upend supply chains, and cost American jobs.

"The effects of retaliatory measures will similarly ripple across our economy, stunting growth and job creation while threatening to fracture our alliances with our strongest international partners."

Perrin Beatty, the president of the Canadian Chamber of Commerce, called Thursday's decision "tragic" and said it flew in the face of a long history of military, economic and diplomatic co-operation between the two countries.

"The unilateral action by the Trump administration severely damages that relationship. It's illegal. It's immoral. It's irrational," Beatty said in an interview.

During a conference call early Thursday, Commerce Secretary Wilbur Ross played down the divisions. But the move means Trump will be face to face with a number of leaders who have taken retaliatory action against the U.S. when he makes his closely watched Canadian debut at the G7 next week in Quebec.

Ross shrugged off questions about the U.S. facing possible retaliation, or whether the move would negatively affect the G7 meeting. And he repeated that while he was looking forward to continuing negotiations, the U.S. decision was based on national security grounds.

The long-threatened tactic is sure to cast a pall over the G7, with some observers saying a G6-plus-one scenario is already shaping up, with Trump as the outlier.

"There are periodic disagreements between any two countries on any given set of topics. That doesn't necessarily mean that it derails other discussions at all," said Ross.

"It all depends on how the various parties react to the circumstances."

While the tariffs have had "major, positive effects" on industry jobs and workers, "the Trump administration's actions underscore its commitment to good-faith negotiations with our allies to enhance our national security while supporting American workers," the White House said in a statement.

Ontario Premier Kathleen Wynne, campaigning in advance of the June 7 provincial election, savaged the U.S. president as she called the tariff measure short-sighted and urged Trudeau "to take the strongest retaliation possible to protect our workers" and industry.

"I think that we've all had just about enough of Donald Trump.... He doesn't seem to get that his bluster and his bullying are costing people real jobs — in his own country, in Canada and in Ontario," Wynne said.

"I really believe that now the time for talk is done. Donald Trump is a bully and the only way to deal with a bully is to stand up and push back and we have to do that."

But one Canada watcher in Washington stressed there was no need for Canada to take Thursday's decision personally.

"The key takeaway is Donald Trump does not view the Canada-U.S. relationship as special," Eric Miller of the Rideau Potomac Strategy Group, said in an interview.